Shooting near synagogue in Germany on Yom Kippur
Photo: Reuters 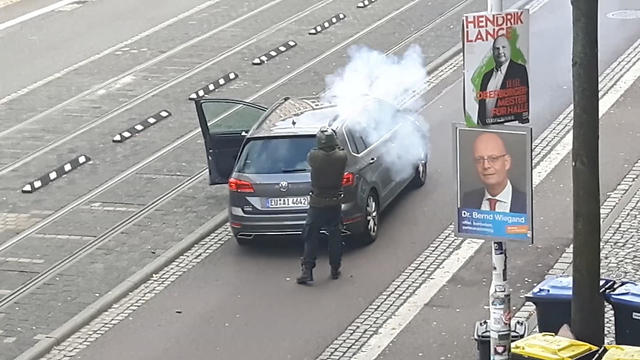 Two killed in shooting near synagogue in Germany

Two people were killed in shooting attacks on a synagogue and a kebab bistro in the eastern German city of Halle on Wednesday and one suspect was arrested, but two others fled in a hijacked a car, officials said.

The violence occurred on Yom Kippur, the holiest day of the calendar in Judaism when Jews fast, seeking atonement.

The two suspects on the loose headed out on a motorway that leads to Munich in the country's south, according to the mayor of the town of Landsberg, adjacent to Halle. Gunfire was also heard in Landsberg, Focus Online reported.

A spokeswoman for the Halle municipal government said one shooting took place in front of the synagogue on Humboldt street and its accompanying cemetery, while a second burst of gunfire targeted the kebab shop in the city in the province of Saxony.

Max Privorozki, Halle's Jewish community chairman, described how a gunman tried to shoot his way into the city's synagogue.

"We saw via the camera system at our synagogue that a heavily-armed perpetrator with a steel helmet and a gun tried to shoot open our doors," he told the Stuttgarter Zeitung newspaper. "The man looked like he was from the special forces...But our doors held.

"We barricaded the doors from inside and waited for the police," he said, adding that about 70-80 people were inside the Humboldt street synagogue celebrating Yom Kippur.

Anti-Semitism is a particularly sensitive issue in Germany, which during World War Two was responsible for the genocide of 6 million Jews in the Nazi Holocaust. Around 200,000 Jews live today in Germany, a country of around 83 million.

Another Halle city spokesman said an emergency situation had been declared and all residents advised to stay at home. He said that emergency services and police were evacuating people from the synagogue.

Broadcasters showed images of an alleged perpetrator dressed in combat garb including a helmet.

"Our forces have detained one person," local police said on Twitter. "Please nonetheless remain vigilant." Earlier, police tweeted: "According to initial findings, two people were killed in Halle. There were several shots."

The identities of the victims were not immediately known.

An unnamed eyewitness told local media the assailant at the synagogue was dressed in combat gear including a helmet and had thrown several explosive devices into the cemetery.

Another eyewitness, Conrad Roesler, described the attack on the kebab bistro. "He had an assault rifle and a helmet and suddenly he threw what looked like a grenade.

It bounced off a door frame...Suddenly he picked up the rifle and fired at the shop...I hid in the toilet," Roesler told n-tv television.

Regional public broadcaster MDR broadcast images of a man in combat clothing firing shots along a street from behind a car.

"This is terrible news from Halle and I hope very much that the police catch the perpetrator, or perpetrators, as quickly as possible," federal government spokesman Steffen Seibert said, interrupting a regular government news conference.

The federal prosecutor's office said it was taking over the investigation, a procedural step which indicates a possible link to terrorism under German law.

Shooting near synagogue in Germany on Yom Kippur (photo: AP)

In Berlin, the state interior senator advised police to step up security at Jewish institutions in the German capital.

Occasional past attacks have ranged from the scrawling of Nazi swastikas on gravestones to fire-bombings at synagogues and even several murders. In recent years, cases of assault or verbal abuse, in some cases directed against people wearing traditional Jewish skullcaps, have raised an outcry.