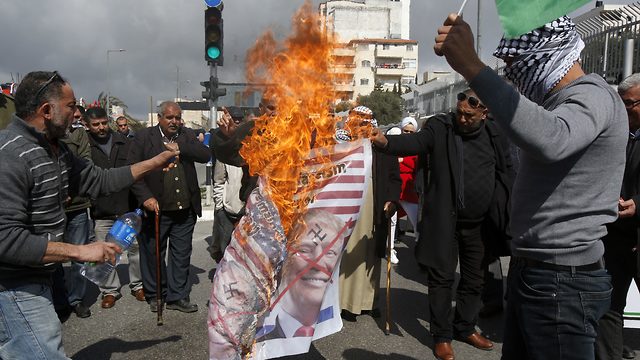 Palestinians split by walkback on tax revenue collected by Israel

Cash-strapped PA reverses refusal to accept monies collected on its behalf over deducation of stipends for terrorists and their families, earning condemnation from those who had salaries cut for months

The Palestinian Authority’s decision to accept hundreds of millions of dollars in tax revenues collected by Israel has divided its leadership and enraged many among the public. The PA declined to accept any funds last February to protest Israel’s decision to withhold $12 million a month, a sum the PA allocates to its Martyrs’ Fund, which pays stipends to the families of security prisoners in Israeli jails or those killed in clashes with Israeli troops or while carrying out attacks.

Palestinians in Bethlehem burn a banner depicting U.S. President Donald Trump and Prime Minister Benjamin Netanyahu to protest Israel’s decision to withhold tax revenue owed to the PA, Feb. 19, 2019
Palestinian President Mahmoud Abbas repeatedly insisted his government would refuse any amount that was not paid in full. “We will not accept money even if one penny is missing,” Abbas said last July. This policy led to budgetary shortfalls and forced the PA to slash the salaries of tens of thousands of civil servants in the West Bank, where unemployment is estimated at 30 percent. The walk-back has now infuriated many Palestinians, who say the PA played with their livelihoods for the past eight months.

Hussein al-Sheikh, the PA minister of civil affairs and an aide to Abbas, told reporters on Monday that during a meeting with Finance Minister Moshe Kahlon last week, the Israeli side pledged to arrange a bilateral meeting under French auspices to review the Paris Protocol, which governs the economic relationship between the PA and Israel.

Sheikh called it “a step in the right direction to ensure our demands” and “a great achievement for the Palestinian people.”

Mahmoud Abbas and Benjamin Netanyahu meeting at Shimon Peres' funeral in Jerusalem, Sept. 2016 (Photo: Amos Ben Gershom/GPO)
But Nasser Tahboub, a former PA official and one-time dean of the Faculty of Economics at Jerusalem’s Al-Quds University, harshly criticized the PA, saying that the “unwise” decision had been made by the “stupidest leadership ever passed on to the Palestinian people.” “It is a stupid leadership and it is proud of its stupidity,” he says. “This decision means that Israel will deduct all the debts owed to the Palestinians, including debts to the PA and municipalities. Debts to municipalities and hospitals are not the responsibility of the Authority.” Tahboub lists four things he felt lay behind the PA’s decision to accept only partial payments.

“The PA believes that (Prime Minister Benjamin) Netanyahu (will be unable to form a coalition and that) another government will abolish the decision (to withhold the funds),” he says.

“Second, the Arabs did not create a safety net,” he says, referring to the pledge by Arab nations, mainly wealthy Gulf states, to provide the PA with a safety net worth $100 million, which was never activated.

“Third,” Tahboub says, “the PA is beginning to feel that the Palestinian people are losing hope and confidence in it. The fourth and most important thing is the state of the Palestinian banking system and statements by Azzam al-Shawa (head of the Palestinian Monetary Authority) that have created a sense of unease in the street that the PA is on its way to economic collapse.” In addition, divisions exist within the PA itself: Prime Minister Mohammad Shtayyeh insists that economic disengagement from Israel is the way forward, while Sheikh, who is particularly close to Abbas, champions political disengagement.

Palestinian Prime Minister Mohammed Shtayyeh
“The decision (to accept partial payments) was not surprising, but was expected eight months after the crisis,” says Naser Abdel Kareem, a professor of finance and economics at the Arab American University Graduate School in Ramallah. The PA, he says, was looking for a “solution, even if gradual, in order to help it in providing its services and paying the salaries of its employees. They felt their bet was not paying off, that their calculations and estimates were not realistic. Therefore, they accepted the payments.” Abdel Kareem attributes the PA’s decision to the outcome of the recent election in Israel. “The results of the Israeli election, especially the survival of Netanyahu in the political arena, disappointed the Palestinian leadership,” he says. “The PA could not withstand any more. There is a huge deficit in the Palestinian economy.” A senior PA official who asked not to be identified because he had not been authorized to comment on the matter, says the PA has been under tremendous political and financial pressure from the European Union and Arab states.

“The PA is fighting for its existence now,” the official says. “That’s why it felt it had to accept the money.”