Israel has taken another step in moving from fossil fuels to environmentally friendly renewable energy, approving its biggest plant of unique solar panels to date. The plant, which is for commercial use, operates without generating pollution or any greenhouse gas emissions.

The Electricity Authority (TEA) and Energy Minister Yuval Steinitz have recently approved the commercial activation of the Ashalim photovoltaic power station - located in the Negev Desert, south of the city of Be'er Sheva - for a period of twenty years.

The massive station, which spreads across 1250 dunam (309 acres), was built by the Solel Boneh construction and civil engineering company and the Belectric company - an international company that specializes in photovoltaic technology worldwide, investing some NIS 600 million so far.

The project started as a thermal energy power plant aimed to provide renewable energy using a technology that converts the sun's thermal energy into heat, which is then used to create electricity using steam.

This technology is now considered expensive and needlessly complicated when compared to photovoltaic technology, which converts light into electricity using solar cells. 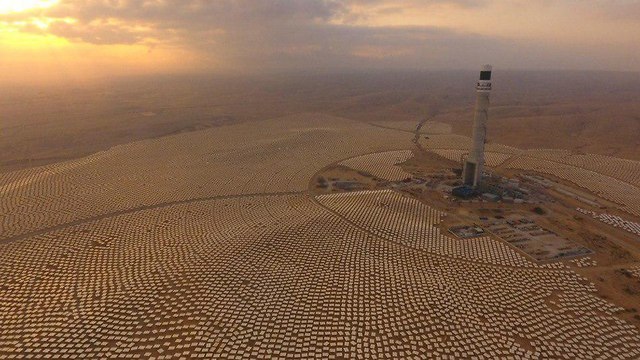 As a result of advancement in the field of photovoltaic technology, and in order to cut costs for the Israeli consumer, the TEA decided to convert the Ashalim power station to photovoltaic-based power plant, saving the population roughly NIS 120 million a year.

"I'm proud to lead the Ministry of Energy, which - together with the TEA - helped advance the use of solar energy in order to create the highest output of electricity seen in the field in the last decade," said Steinitz.