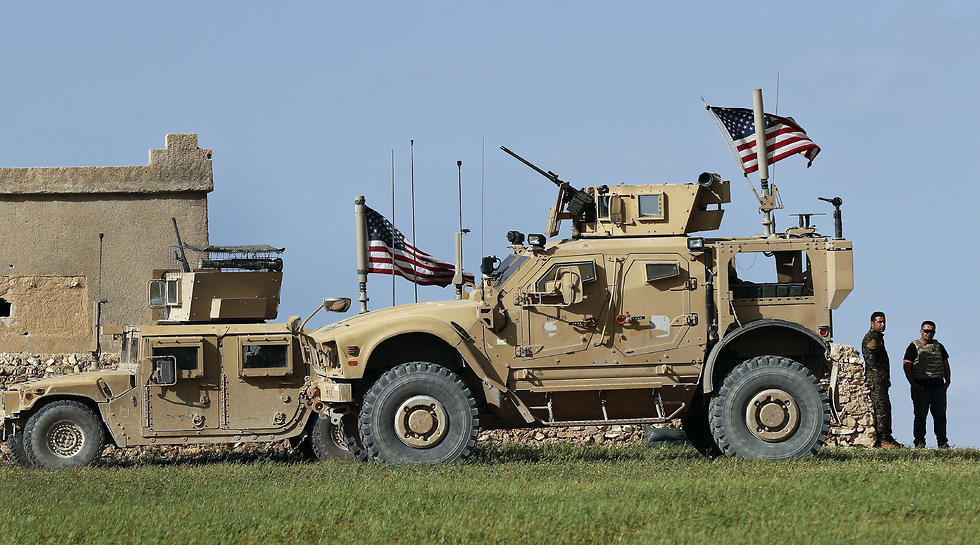 Analysis: Persian Gulf nations ponder Trump's apparent acquiescence to Turkey's invasion of Kurdish territory, making their own calculations about how far to trust the American president if Iran tensions boil over

For decades considered a U.S. national security priority, the Persian Gulf remains home to tens of thousands of American troops spread across sprawling bases protecting crucial routes for global energy supplies. But while U.S.-Iran tensions in the Gulf appeared close to sparking a global conflagration this summer, attention now rapidly has shifted to Syria in a conflict that no less has impact here.

U.S. troops withdraw from Northern Syria (Photo: AP)
Countries across the Persian Gulf wonder what they should take away from President Donald Trump's withdrawal of American forces from Syria after apparently acquiescing to Turkey's invasion of Kurdish territory.

Just as Turkey's expedition has seen a rapid flux in alliances in Syria's yearslong war, it also has seen Gulf Arab nations make their own calculations about how far to trust Trump if tensions with Iran boil over.

These nations all have their own views on Turkey's ambitions under President Recep Tayyep Erdogan as well.

Meanwhile, the U.S. withdrawal comes after years of Tehran calling for America to end its military presence in a nation Iran views as a critical outpost to pressure Israel.

Trump has boosted the U.S. military presence across the Persian Gulf since May, when he sent an aircraft carrier strike group, nuclear-capable B-52 bombers and advanced jetfighters to the region over what the White House described as threats from Iran.

In the time since, he's sent U.S. troops and Patriot missiles into Saudi Arabia for the first time since the Sept. 11, 2001, terror attacks, an assault launched by al-Qaida leader Osama bin Laden in part over America's presence there.

The tensions worry Kuwait and Oman, which have worked to ease tensions.

Kuwait even went so far as to tell its public it had eight months' worth of food in case of a national emergency.

Qatar, still boycotted by Bahrain, Egypt, Saudi Arabia and the United Arab Emirates, has relied on Iranian airspace and shares a massive offshore natural gas field with Tehran that provides the nation its wealth.

However, Saudi Arabia likely understands the transactional nature by which Trump framed his decision.

"We are sending troops and other things to the Middle East to help Saudi Arabia," Trump told journalists on the White House lawn on Oct. 11. "But are you ready? Saudi Arabia at my request has agreed to pay us for everything we're doing. That's a first."

Both Saudi Arabia and the United Arab Emirates, the federation of sheikhdoms home to Dubai, welcomed Trump's election and his policy of increasing pressure on Iran.

But after Trump backed down from retaliating over Iran shooting down a U.S. military surveillance drone in June, the UAE has made efforts to ease tensions with Tehran by sending officials there.

It also began pulling its troops out of a yearslong, Saudi-led war in Yemen against rebels backed by Iran.

Saudi Arabia's Prince Mohammed even recently told CBS that the kingdom is "open to all initiatives for a political solution in Yemen." That's a long way from another CBS interview last year in which he compared to Supreme Leader Ayatollah Ali Khamenei to Nazi leader Adolf Hitler. That pragmatism can be heard in how both Saudi Arabia and the UAE look at Syria. Since the start of the country's war in 2011, it backed those trying to overthrow Assad.

Lately, though, Emiratis appear to have accepted the idea of Assad remaining in Syria.

They reopened their embassy in Damascus in December and are encouraging Emirati business officials to invest there to increase the UAE's soft power.

The National, the Abu Dhabi-based, government-linked newspaper, in an editorial Tuesday even went as far as to refer to Assad as "the lesser of two evils" for the Kurds. It criticized the U.S. for leaving the Kurds "abandoned" with "little leverage." "The world must not stand idle while Syria is invaded and its various ethnic factions endure yet more losses," the newspaper said. That the UAE would move closer to accepting Assad suggests Saudi Arabia may not be far behind. And while they remain suspicious of Iran's influence, it is likely they view Turkey as the greater concern.

For the UAE's government in Abu Dhabi, which long has targeted Islamists as a threat to their sheikhdom's hereditary rulers, Erdogan's embrace of Sunni Islamists remains deeply concerning.

Saudi Arabia views Ankara with suspicion through the prism of history as the Ottomans once governed the two holy mosques and claimed the mantle of Islam's protector, a role the Al Saud ruling family now holds.

Erdogan previously has suggested that Turkey "is the only country that can lead the Muslim world."

In a sign of hedging their bets, Saudi Arabia and the UAE hosted Russian President Vladimir Putin in their capitals this week.

Putin received the red carpet treatment in both nations, including escorts by troops on horseback and even a military jet flyover that sprayed smoke in the red, white and blue of the Russian flag.

Putin intervened in Syria to support Assad and maintain Moscow's military presence on the Mediterranean Sea.

U.S. troops, however, maintain their presence across the Persian Gulf. But Gulf Arab leaders undoubtedly have to wonder if and when that could change.