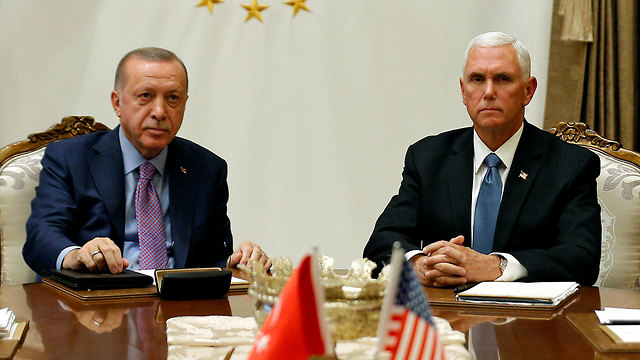 Deal between US, Turkey spawns more questions than answers

President Donald Trump hailed it as a great day for civilization, but the agreement hammered out Thursday in Ankara between U.S. and Turkish leaders spawned more questions than answers.

The deal calls for a five-day pause in fighting between Turkish and Kurdish fighters and puts at least a temporary halt to the battle along the Syrian border.

But if implemented it would achieve all the main objectives Turkey announced when it launched its assault on Oct. 9: control of a strip of Syria more than 30 km (20 miles) deep, with the Kurdish militia, once U.S. allies, obliged to pull out.

It was also unclear if the Kurdish-led Syrian Democratic Forces (SDF) would fully comply with the agreement, which would leave Turkish forces in charge of a swathe of territory that the Kurds once held with U.S. military support.

But what it means for U.S. forces currently withdrawing from Syria remained unclear.

A U.S. delegation led by Vice President Mike Pence met with Turkish leaders, including President Recep Tayyip Erdogan, for more than four hours Thursday and agreed to the five-day cease-fire in the Turkish assault on Kurdish fighters in northern Syria.

The arrangement says the Syrian Kurdish fighters will withdraw out of what has been called a safe zone that is about 32-kilometers deep into Syria and stretches across about 125 kilometers (78 miles) of the central portion of the border between the two countries and a halt to the economic sanctions that Trump announced Monday when he warned that he could obliterate Turkey's economy.

But almost immediately there were disagreements over what to call the deal and what it meant. Pence and Trump routinely referred to it as a cease-fire.

Turkish Foreign Minister Mevlut Cavusoglu rejected that term and called it a "pause" in fighting, because he said cease-fires are only possible between "two legitimate sides."

"Kurdish fighters would be forced to give up their heavy weapons and their positions would be destroyed", Cavusoglu said adding that Turkey had given no commitments not to engage in military operations in the flashpoint Syrian border town of Kobani

Cavusoglu also said that the Turks would only halt their operation "after the terrorist elements depart" from northeast Syria.

What also remained unclear is what the Turkish-backed militias of Syrian fighters will do and how much control the Turkish military will have or try to exert over them.

Aldar Xelil, a leading Syrian Kurdish politician, told Al Arabiya television that the Kurds would abide by the ceasefire but would defend themselves.

The Turkish assault has created a new humanitarian crisis in Syria with 200,000 civilians taking flight.

There were mixed signals Thursday over what the agreement means for U.S. forces that began a withdrawal from Syria earlier this week as fighting between the Turkish and Kurdish forces escalated and began to threaten the safety of American troops. U.S. officials said the ongoing withdrawal was continuing and would probably take a couple of weeks.

Pence reiterated that, as Trump has said, the U.S. will not have "military personnel on the ground," but other diplomatic and humanitarian aid would go on. He also said that the U.S. will "facilitate" the orderly withdrawal of the Kurdish forces from the safe zone that is already beginning.

And Trump said the U.S. will continue to watch the Islamic State, and that the Kurdish fighters will control that monitoring with U.S. supervision.

Pentagon officials did not provide an explanation of how that would work.

As the U.S. withdraws, a fundamental question is what the battle to prevent a re-emergence of the Islamic State will look like.

U.S. officials have provided little guidance, but they note that the U.S. can, if needed, launch strikes from bases in Iraq near the Syria border.

One of the biggest threats in the conflict has been the potential that thousands of imprisoned IS fighters could escape.

Kurdish forces have been guarding the prisons, but some fighters have left to join the battle along the border. And shelling in some areas may have led to the escape of fewer than 100 detainees.

Trump said that the detained will be controlled by "different groups." But he added that the U.S. "will be watching.

We will be in charge. And they will be under very, very powerful and strict control."

That may be hard to do if U.S. troops are not physically in Syria.