Netanyahu relinquishes government effort, president to give Gantz a shot

Prime Minister Benjamin Netanyahu has informed President Reuven Rivlin Monday that he is returning the mandate he received to form a government, since he was unable to do so.

A statement from the president's office issued in response says President Rivlin will pass the mandate to forming a government to Blue and White leader MK Benny Gantz as soon as possible. 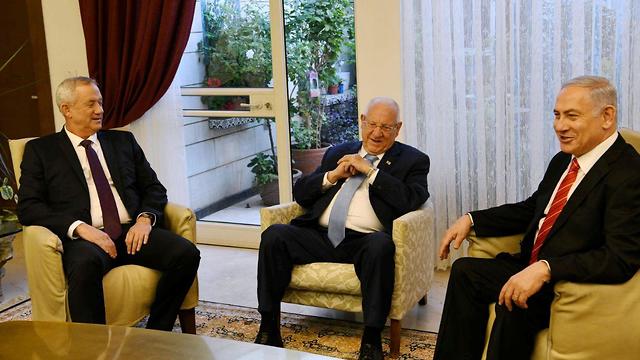 "President Rivlin received Prime Minister Benjamin Netanyahu's announcement that he is returning the mandate to form the government to the president because he was unable to do," read the statement.

"In accordance with the provisions of Basic Law: The Government (2001), the Director General of Beit HaNasi (President's residence), Harel Tubi, will speak to all Knesset factions to inform them that the president intends to transfer the mandate for forming the government, as soon as possible, to Chairman of Blue and White, MK Benny Gantz and to make available to him the 28 days allocated to do so under the law". 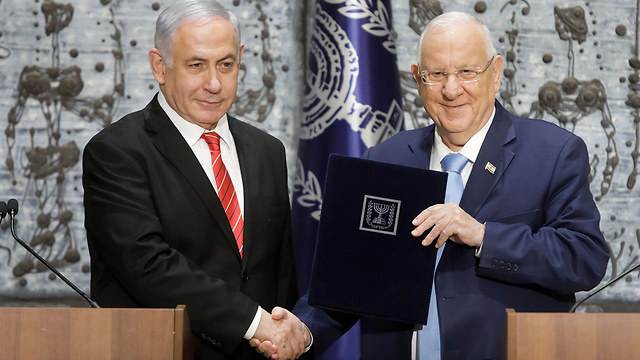 Netanyahu receives mandate from President Rivlin (Photo: AP)
Blue and White officials responded to Netanyahu's decision, saying they are 'determined to establish a liberal unity government led by Gantz'. "The time for spins had passed, it's time for action," read a statement released by the party. "Blue and White is determined to establish the liberal unity government led by Benny Gantz, which the people elected a month ago".

Number 2 on the Blue and White list MK Yair Lapid wrote on Twitter: "Bibi has failed again. It is already becoming a serial failure".

Blue and White MK Ofer Shelah wrote on Twitter: "Netanyahu wants elections, it is clear. Now those who care have 28 days to form a government with us that will repair the damages Netanyahu had caused".