Hariri and the protesters
Photos: Reuters 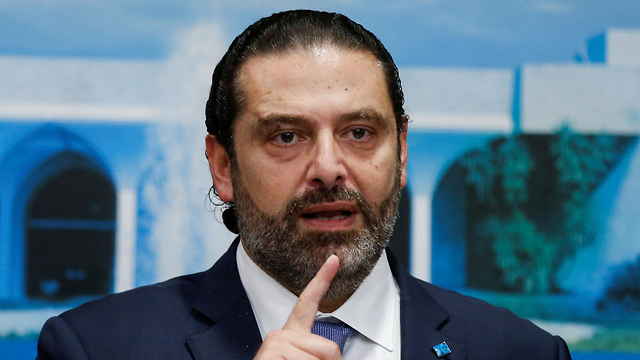 Lebanese PM to resign amid protests

Last week, Hariri sought to defuse popular anger through a set of reform measures including no new taxes for the next fiscal year, politicians pay to be axed by 50% and new anti-corruption legislations

Lebanon's Prime Minister Saad al-Hariri is likely to resign, two official sources said on Tuesday, amid unprecedented protests against a ruling elite many accuse of corruption, leading Lebanon towards economic collapse unseen since the 1975-90 civil war.

His resignation would defy the powerful Shi'ite Muslim group Hezbollah, whose leader Sayyed Hassan Nasrallah has twice said he was against such a step, citing the risk of a dangerous void.

In the street, supporters of Hezbollah and its Shi'ite ally Amal forced protesters from a roadblock they had set up in Beirut, tearing down their tents and fighting with them, forcing the police to intervene, the first such incident in the capital.

The Hezbollah and Amal supporters fanned out in the downtown area shouting "Shia, Shia" in reference to themselves and cursing protesters who have been calling for revolution.

Last week, Hariri sought to defuse popular anger through a set of reform measures agreed with other groups in his coalition government, including Hezbollah.

The list of reforms included among other commitments, no new taxes for the next fiscal year, politicians pay to be axed by 50% and new anti-corruption legislations.

But with no immediate steps towards enacting these steps, they did not satisfy demonstrators whose demands include the resignation of his coalition government.

One of the sources, a senior official from outside Hariri's Future Party, told Reuters the premier would "most probably" announce the government resignation on Tuesday. The report weighed on Lebanese dollar bonds.

The nationwide protests that had ingulfed Lebanon, have entered their 13th day on Tuesday, leading to the 10th day of banks, schools and business to be closed.

On Monday, the National Bank president in Lebanon said that the state is on the verge of a financial collapse within the next few days, if no political solution for it would be put forth.