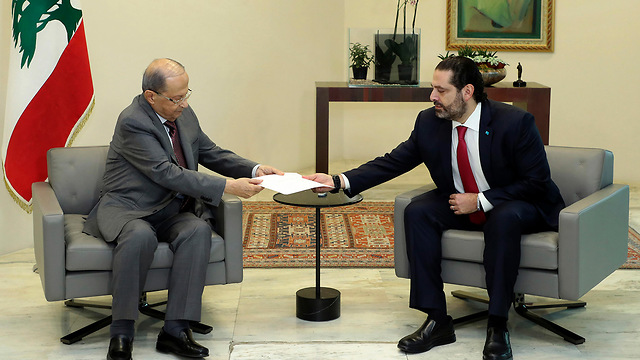 After hitting a dead end in efforts to defuse the crisis sweeping Lebanon, Saad al-Hariri informed a top Hezbollah official on Monday he had no choice but to quit as prime minister in defiance of the powerful Shi'ite group.

The decision by the Sunni leader shocked Hussein al-Khalil, political advisor to Hezbollah leader Sayyed Hassan Nasrallah, who advised him against giving in to protesters who wanted to see his coalition government toppled.

The meeting described to Reuters by four senior sources from outside Hariri's Future Party captures a critical moment in the crisis that has swept Lebanon for the last two weeks as Hariri yielded to the massive street protests against the ruling elite.

The resignation has left a political vacuum and paralyzed a state in need of urgent action to steer Lebanon out of an economic crisis that is hitting all Lebanese hard, including Hezbollah's Shi'ite constituency.

Officials at Hariri's office and Hezbollah could not immediately be reached for comment.

The meeting which began at 8 p.m. at Hariri's Beit al-Wasat residence in central Beirut did not last long.

"I have made my decision I want to resign to make a positive shock and give the protests some of what they want," Hariri told Khalil, according to one of the sources.

Khalil sought to change his mind. "These protests are nearly over, breathing their last breaths, we are next to you, steel yourself," Khalil told Hariri.

But Hariri stuck by his decision.

He complained he was not getting the support he needed to carry out a major cabinet reshuffle that might have defused the street and allow the quick implementation of reforms.

"I can no longer bear it and I am not getting any help," Hariri said.

The main sticking point, Hariri said, was Hezbollah's Christian ally Foreign Minister Gebran Bassil, a son-in-law of President Michel Aoun with whom the prime minister had clashed repeatedly since his cabinet was formed in January.

While Hariri sought a major reshuffle that would remove Bassil - a target of protester ridicule - and others, Bassil and Aoun had resisted any reshuffle on the basis that demonstrators might not leave the street and demand even more concessions.

"You, Hezbollah, are standing behind Gebran and supporting him," Hariri told Khalil, according to the source.

A senior official familiar with his thinking told Reuters he could form a new government if his conditions are met.

The resignation is a major blow for Hezbollah, which is more deeply involved than ever in the affairs of Lebanese government and as keen as anyone to stave off deeper financial problems that could lead to a destabilizing currency crisis.

Ahead of the resignation, Nasrallah had twice said he was against the resignation of the Hariri government, suggesting that some of the protesters were financed by the group's foreign adversaries and implementing their agendas.

The post of prime minister must be filled by a Sunni Muslim in Lebanon's sectarian system, and while Hezbollah has Sunni allies, Hariri is seen as critical to navigating a way out of this crisis because of his international backing.

"This is a strong blow to Hezbollah. Its hands have now been tied," said a source familiar with Hezbollah's thinking. "The biggest winner is Hariri."

Hariri entered this cabinet, his third, with the balance of power tilted against him and in favor of the heavily armed Hezbollah, which together with its allies won more than 70 of parliament's 128 seats in a 2018 election.

Hariri had lost more than one third of his lawmakers in that election, including some to Sunnis aligned with Hezbollah.

Hezbollah allies, including the FPM of Bassil and Aoun, secured the lion's share of cabinet seats in Hariri's cabinet. Hariri clashed with Bassil, particularly over long-elusive reforms needed to plug gaping holes in the state finances.

Hezbollah forged its alliance with the FPM in 2006, winning an influential Christian friend as Lebanese politics was recast by the withdrawal of the Syrian government forces that had dominated the country since the end of the 1975-90 civil war.

As foreign minister, Bassil has consistently spoken in international forums such as the Arab league to defend Hezbollah and its possession of weapons.

He is seen as a presidential hopeful.

In line with Hezbollah's view, Bassil called for Syria to be allowed back into the Arab League at a meeting earlier this month, generating more friction with Hariri because it was at odds with Lebanese government policy.

The source familiar with Hezbollah's thinking said the group had refrained from attacking Hariri over his decision to quit, to leave open the possibility of him becoming prime minister of a new coalition cabinet.

Hezbollah "must preserve a way back" from the crisis, the source said.