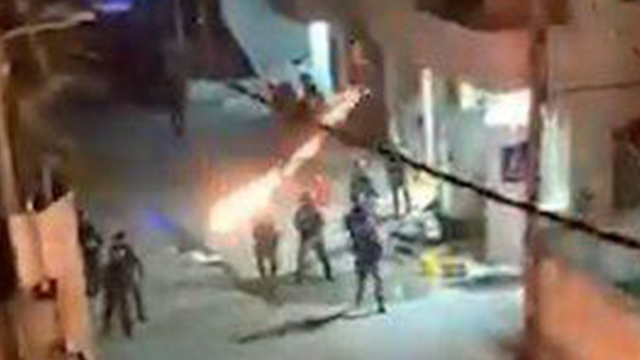 Police use riot dispersal measures after residents throw Molotov cocktails and stones at officers; locals say police harassment occurs on daily basis, claim 'war' has been declared on them

Clashes erupted late Saturday night between Israel Police officers and inhabitants of the East Jerusalem neighborhood of Isawiya, following an arrest of one of the residents. Police reported that the recent disturbances included Molotov cocktails and stones thrown at police officers, who responded with riot dispersal measures.
Clashes in Isawiya
X

Several people were lightly hurt, among them a policeman hit on the head by a stone.

Police also said that two individuals were arrested for their involvement in the riots in the predominantly Arab neighborhood.

Isawiya residents said that they were unsurprised by the clashes, given the tensions with police on a daily basis.

"Police enter the neighborhood every day and break into shops and houses, despite the civilians not hurting them. The atmosphere is very tense," said one resident.

"Police are scaring women and children, with no repercussions for such behavior. It has become an everyday event, it's only natural for people to explode and tangle with the police for taunting them," she said.

"The police are merciless. They keep coming into our neighborhood daily and block roads even though local residents did nothing to them," said Ahmad, another local resident.

"They enter houses, conduct searches and arrest people who are released a few hours later. It's unclear why they are behaving in so a manner, it's a war on the inhabitants," he said.

Last week, the parents' associations shuttered all the neighborhood's schools and kindergartens for three days following the arrest of a student while he was in class. The action ended after the parents met with municipal officials, promising to return to normalcy.

Following the recent clashes, parents have called for a second strike.

"It's impossible to return to schools until our lives are normal again," the parents said. "We are scared to send our kids to school in fear of them encountering the police."

Police said that over the weekend, 24 Molotov cocktails were hurtled by residents, as well as stones and fire crackers, resulting in a female resident being taken to the hospital with serious injuries.

Police say that enforcement actions over the last few months have resulted in a significate decline in the number of attacks on civilians along East Jerusalem's main highways.