One of the largest streams in the Judean Desert is green, wet, rocky and dry, and dazzingly beautiful

The winter flooding that usually occurs in the Ein Gedi area has been delayed this year, and in the intense desert heat, with the scent of autumn still evident, we decided to get in a relaxed hike in Nahal Arugot before the trails are closed with warnings that the area is flooded. Though I’m slightly embarrassed to admit it, the last time I hiked in Nahal Arugot, in the Ein Gedi nature reserve, was on a class trip with my eldest daughter, and that was quite some time ago. This week I realized how my laziness—I always made do with Nahal David—also caused me to lose out, big-time. Though the beauty of Nahal David, which is gradually recovering from the last fire, is enjoyable, a hike in Nahal Arugot is much more exhilarating. 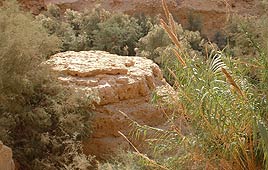 Desert greenery mixes tropical, desert plants‏ (צילום: יפה רזיאל)
1
2
3
Located in the southern part of the Ein Gedi nature reserve, Nahal Arugot is some 40 kilometers in length, with a total area of 200 square kilometers. It is considered one of the largest streams in the Judean Desert. The desert rains that are the source of its water seep into the ground water, flow underground, and emerge in the nature reserve. During rainy winters powerful floodwaters flow in the stream, but even in other seasons the streams have water, and walking in them expands the soul. Those of you who do not bother to look at the pamphlets they hand out at nature reserves should make sure to take with you the trail map handed out at the entrance, including both long and short paths. Don't miss the long trail (a 2-3 hour hike), since a walk in the enchanted green oasis is dazzlingly beautiful.

Right at the entrance to the nature reserve we were welcomed by pretty ibexes, who were busy eating and did not notice our presence. Hundreds of people visit every week, and the ibexes have apparently gotten used to them. Feeding the ibexes is not permitted: junk food is not included in their daily menu, and in any case, you are not allowed to bring food into the nature reserve. This may be punishment for gluttons, but it is a blessing for nature, so we restrained ourselves and postponed our meal until we got to the parking lots that are set up for picnics.

Beauty all along the trail

Nahal Arugot’s charm can be seen as you advance along the trail. The canyon that surrounds the river bed is visible everywhere in its full glory, an oasis on the rugged edge of the desert. In some places along the trail we decided to check the quality of our footgear and to walk through the water. All the Nike, Adidas, and Puma shoes turned muddy, and we all got wet up to our knees, but on hot days in the desert there is nothing better than splashing in the cool, refreshing waters of the stream.

We also feasted our eyes on a close-up view of the thick vegetation that is intertwined with the rocks, the pebbles in the stream, and the green paths.

Try to be as quiet as you can and listen to the sounds of the desert, and don’t forget to look up as well. The Syrian-African rift is an important route for birds of prey, waterfowl, and songbirds. More than 200 kinds of birds can be seen in the nature reserve in the fall, including white wagtails, redbreasts that stay with us the entire winter, desert partridges, eagles, Dead Sea starlings, and white-tailed wheatears.

The high point of the hike is the hidden waterfall. Although the floods and the rains are still ahead of us, the cool waterfall is extremely impressive, and you can take off your clothes and take a dip. Position yourself so that your shoulders are under the strong stream of water, and you get a massage that will get your blood moving.

In the stream itself, as in the area of the waterfall, there is tropical vegetation combined with stream vegetation: reeds and bulrushes, tall sugarcane, tamarisks, and willows.

We made our way back using a different trail, and while the view from the rocky slope is dry, it is nonetheless breathtaking. When you’re on this steep trail you must be extremely careful: walk only on marked paths, obey the “no entry” signs, bring with you at least two liters of water per person, don’t climb up on cliffs, and most importantly, don’t smoke in the area of the stream because there is a danger of fires, which unfortunately wreaked destruction not long ago. Family and other animals The animals that live in the area of the Ein Gedi nature reserve have their own daily routine, and there is no guarantee that you will encounter them, but if you are lucky you may see a rabbit, a fox, a hyena, a hyrax, a starred agama lizard, or a river frog. What about the leopards, you ask? We were also curious, and those in the know say that they come out mostly at night, and can be seen only rarely, but that they leave their mark in the way of droppings, holes, and paw prints. Although the trail is rather long, it is suitable for families with children who are accustomed to hiking. Parents with children around five years old, the next generation of hikers, were walking comfortably on the paths of the stream when we were there. Nahal Arugot, Ein Gedi Nature Reserve: 23 shekels for adults, 12 shekels for children, including entry to Nahal David. Open every day, 8 a.m.-4 p.m. Last entrance at 3 p.m. Phone number: 08-658-4285

פרסום ראשון: 12.14.05, 14:47
commentsend to friendshareshare
See all talkbacks Close all talkbacks
new comment
Next
Previous
Warning:
This will delete your current comment
cancelOk