One of the suspects in court
Photo: Avishag Shaar-Yeshuv

'I felt they wanted to murder me'

“At certain moments I felt my end was nearing,” one soldier told Yedioth Ahronoth, as shocking new details of the Haifa assault emerged Sunday.

Meanwhile, police arrested two additional suspects in connection to the assault. It is suspected at least  six assailants currently in custody attacked the soldiers on the assumption they had hurled stones at their house. Police later said a seventh suspect has also been arrested. Officers were at one point of the opinion the attack was a case of mistaken identity.

During the court hearing, the police representative claimed the assault appeared to be of nationalistic nature despite an earlier statement suggesting it was an act of hooliganism. He explained that the assailants cried anti-Jewish slurs as they were attacking the soldiers.

The suspects' attorney Hamoudi Masri told Ynet that the judge exaggerated by comparing the act with the Ramallah lynch, especially given the fact the 2000 incident resulted in the death of the victims. "This is a public conviction which I am sure will not amount to a criminal one," he said. The two 19-year-old soldiers, who were back home for the weekend, decided to go out Friday night. During the outing, one of them felt intense pain in his arm and the two headed to Haifa’s Rambam hospital.

“After we parked the car, another vehicle approaching quickly stopped next to us,” one victim said. “They asked us whether we’re Jewish, and then started yelling ‘Jews, Jews.’ We ran in different directions but they chased us.” “They caught up with me and started to beat me up with clubs all over my body. I felt they wanted to murder me,” he said. “I saw about 15 or 20 people and felt I was finished.”

According to the second victim, the assailants came out of three vehicles equipped with clubs and metal rods.

“Seven or eight people grabbed hold of me, beat me up and kicked me all over my body,” he said. “They also tried to hit my head with a club, but I protected myself with my arms. That’s why my arms were pulverized. They hit also my head and pelvis with a rock.” During the savage assault, the attackers decided to “leave their mark” on one of the victims, resorting to a particularly brutal tactic.

“At one point they pounded my head against the pavement,” one soldier said. “One of them grabbed hold of my arms and someone who stood above me engraved something on my head using a knife or a sharp object. I fainted.” 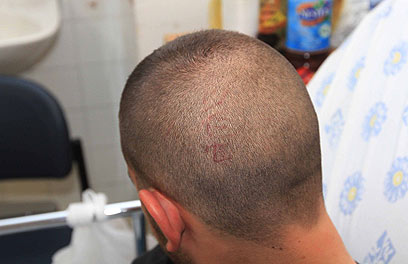 Arabs used sharp object on victim's head
As it turned out, the assailants engraved the words “you dog” in Arabic on the victim’s head.

Fortunately for the soldiers, Rambam hospital security guards heard their screams and rushed to the scene, prompting the attackers to disperse.

“Luckily the guards made them run away,” one soldier said. “Otherwise, they would have surely killed us.” The soldier’s relatives were horrified to hear about the brutal assault. “They were attacked merely because they’re Jewish,” the father of one victim said. “Dozens of guys with clubs and rocks simply wanted to finish them off.” The uncle of one victim also expressed his shock over the attack, which took place not far from the soldiers’ homes.

“We’re shocked. We couldn’t believe that in our country a person can be assaulted just because he’s Jewish,” the uncle said. “I asked for an Israeli flag so I can hang it above my nephew’s hospital bed. That’s the most appropriate move and I felt it must be done.”