The assailants targeted a passenger bus, a military patrol and a private car. "We are talking about a terror squad that infiltrated into Israel," said IDF spokeswoman Lt. Col. Avital Leibovich. "This is a combined terrorist attack against Israelis."

The manhunt for the terrorists continues as an official reported around 6 pm forces had found another attack site with explosive devices at ready. Defense officials say the cell that committed the attack was comprised of 10-20 terrorists, and security forces succeeded in killing seven. An explosive device was found on one of the bodies, and an additional terrorist was seen escaping into Egypt.

Officials believe the cell was planning a more extensive attack but quick responses by the IDF and special forces prevented additional casualties.

The attacks began around 12 pm, when a cell of three terrorists opened fire on Egged bus 392, heading for Eilat. Witnesses say the three, dressed in army uniforms, opened a barrage of fire on the bus, which was packed full of passengers. 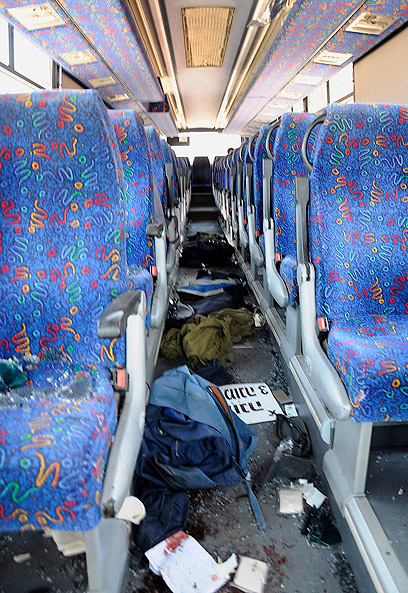 Authorities suspect the terrorists emerged from a white car that was following the bus. They exited the car and began spraying the bus with bullets, firing from top to bottom.

Soldiers who were on the bus returned fire, and then began to treat the wounded. The bus stopped when it reached an IDF checkpoint at Netafim junction.

A second attack, which took place at around 12:30 pm, took place near the Egyptian border. Explosive devices were detonated with the aim of hitting an IDF force headed towards the scene of the first attack. The IDF says there were a number of casualties.

In a third attack, which took place at 12:40 pm, a mortar shell exploded near a vehicle. No one was hurt.

In a fourth attack, which took place at 1:30 pm, terrorists fired at another bus and a private vehicle. In addition, an anti-tank missile was fired at the bus, but hit the private vehicle instead, killing those inside.

After the fourth attack special forces fired at the terrorists and clashes ensued. A number of terrorists were killed, according to reports.

According to the IDF Spokesperson’s Unit, an IDF force that arrived at the scene of the first attack hit an explosive device, and soldiers were injured. IDF Chief of Staff Lt.-Gen Benny Gantz and Police Commissioner Yohanan Danino are en route to GOC Southern Command, where they will confer with Southern Command Chief Major-General Tal Russo.

Military officials say the attack was well-planned, and that the terrorists were well-coordinated throughout. Aside from rifles, the gunmen also had a number of missiles at their disposal, and the army fears they may have been planning to kidnap a soldier. 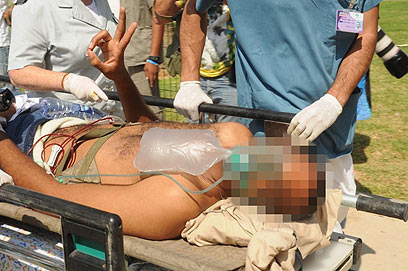 Seven of the wounded were evacuated to Soroka Hospital in Beersheba, according to Dr. Miki Saraf. He said one of those moderately injured is currently undergoing surgery and that a few others would probably need operations as well.

Eilat Police have ordered emergency deployment in the area, and a situation room has been set up at the Yoseftal Hospital, which has declared a mass casualty event.

All of the roads leading to Eilat have been closed, as was the Ovda Airfield. Eilat's airport has been placed on alert.

"Following the terror in the south, please note that a grave travel warning is still in effect on Sinai," the bureau stated.

The US condemned the attack. "We condemn the brutal terrorist attacks in southern Israel today in the strongest terms. Our deepest condolences go to the victims, their families and loved ones, and we wish those injured a speedy recovery. The US and Israel stand united against terror and we hope that those behind this attack will be brought to justice swiftly," a State Department spokesman told Ynet.

Prime Minister Benjamin Netanyahu and Defense Minister Ehud Barak held a security assessment following the attack. The Prime Minister's Office said Netanyahu was being apprised of the situation as it progressed.

"This was a grave terror attack at multiple scenes. It reflects Egypt's failing hold on Sinai and the rise of terror elements," Barak said. "This terror attack originated from Gaza. We will exhaust all measures against the terrorists."

An Egyptian security official denied Thursday that Egypt had any involvement in the attacks. The official told Egyptian media that the armed terrorists operated from within Israel's borders.

"Egypt was in no way involved in the incident, since it is difficult to penetrate the Egypt-Israel border. Moreover, it is impossible to open fire from the Egyptian side to Israel because of the distance," he said.

Ynet learned Thursday that shortly before Thursday's attacks, Jordan had passed a message to Israel suggesting their intelligence indicated that a terror cell was plotting such an attack.

The warning was in tow with defense establishment indications of a clear and present threats of terror in the southern sector.