Death toll from attacks climbs to 8

Another death was declared in the aftermath of Thursday's brutal terror attacks in the south, bringing the toll to eight – six civilians, a soldier, and a police officer. IDF trackers continue to patrol the area of Israel's border, searching for additional terrorists who may be hiding in the area.

Staff-Sergeant Moshe Naftali, 22, a combat soldier from the Golani Brigade, was killed by terrorist fire during the first attack. Senior Non-Commissioned Officer Paskal Avrahami, a 49-year old married father of three from Jerusalem, was killed during Thursday's final shooting.

Meanwhile an IDF investigation reveals that defense officials had intelligence regarding the terror cell that infiltrated Israel, but that they believed the attacks would take place at night. In addition, the cell apparently entered Israel from a point right under an Egyptian military outpost.
Analysis
Sinai a terror hotbed
Roee Nahmias
Analysis: Egypt lost control over Sinai in wake of Mubarak’s fall; Israel paying the price
Sinai a terror hotbed
As midnight approached the area of the border appeared calm, with the final shooting incident taking place shortly after 6 pm – during a briefing of reporters by defense officials. The incident began when fire was opened on a security patrol from the direction of an Egyptian military outpost, killing Officer Avrahami, a decorated and well-known marksman in the police's special counter-terrorism unit. Troops had received orders to open fire only when confronted by suspicious figures, in an attempt to bring an end to the ongoing attacks. The shooting lasted for over an hour, ending at 7:30 pm, from which time quiet has resumed. But forces continue to scour the area in an attempt to locate additional terrorists belonging to the cell that carried out the attacks – of which seven were killed. 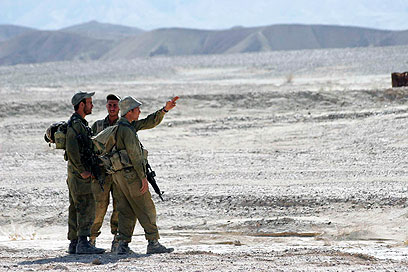 Soldiers search for terrorists near Eilat (Photo: Eliad Levy)
Officials say Golani Brigade troops were in the area due to warnings of attackers coming in from Sinai, and a senior military official said its presence may have prevented even more tragic results. Naftali's patrol was second to arrive on the scene of the attack on Egged bus 392, which was the first of the four attacks. Naftali apparently disembarked from the vehicle, after which terrorists fired and killed him.

The terrorist who killed Naftali was the last one left alive of the three who attacked the bus. The first detonated a suicide vest, and the Golani force ran over a second. The third was killed by additional IDF forces that arrived on the scene.

Meanwhile, a preliminary IDF investigation on the attacks has revealed that the Shin Bet had intelligence about a terror cell that planned to infiltrate Israel from Sinai, but authorities had difficulty ascertaining its relevance because of the dramatic increase in such warnings since the fall of the Egyptian regime.

Further confusion was caused by the belief that the attacks would be carried out at night, defense officials said. In addition, it appears that the terrorists entered Israel from right underneath an Egyptian military outpost, an idea that seemed far-fetched to officials preparing for a possible attack. Just a few minutes before the attack, Jordan conveyed a warning of a terror cell preparing to strike near Eilat. In a briefing earlier, GOC Southern Command Major-General Tal Russo told reporters that three terrorists carrying explosive devices, weapons and grenades entered Israel from Sinai. "They spread across 300-meter range and started shooting at the first bus," he said. "They shot at another car and another bus." In retaliation for the attacks, the IDF bombed a building in Rafah, killing six, Two of those killed were leaders of the Popular Resistance Committees, said to be responsible for the attacks.