'I watched my brother die, helpless'

Danny Gez tells of terrible loss of two couples traveling to Eilat, who died in at hands of terrorists

Just 50 meters separated between Danny Gez and his brother, Moshe, when the latter was killed by terrorists together with his wife and another couple. Helpless, he was forced to watch his brother being shot dead.

"What happened was the result of a police and military failure," said Danny, who barely escaped with his own life intact.

Sisters Flora Gez and Shula Karlinsky and their husbands, Moshe Gez and Dov Karlinsky, were on their way to Eilat for the weekend when they were killed by the cell which terrorized the area on Thursday.

The friends chose to travel to the southern resort city on Highway 12, instead of the on the more popular HaArva Highway.

Several dozens of kilometers north of Eilat, where Highway 12 runs the closest to the Egyptian border, they were ambushed by terrorists. The ensuing hail of bullets left no survivors in the Karlinsky and Gez car. 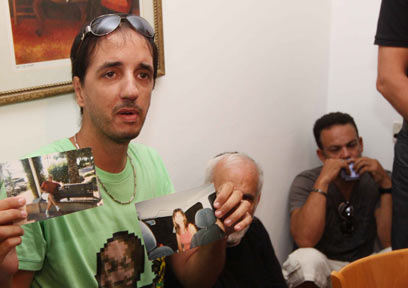 "I saw the terrorists come up to the driver's side, Dovik's side (i.e: Dov Karlinsky), and shoot him, and afterwards shoot the rest," Danny recounted in an interview with Ynet.

"The murder took place before my eyes and I couldn't do anything. They shot them from zero range and even confirmed their deaths."

Gez also narrowly escaped being shot. He recounted seeing two people dressed in camouflage standing on the road, and ordered the driver of his vehicle to stop, and reverse.

Devastated family and friends told Ynet that the two sisters were close friends and that both were educators held in high esteem by their colleagues, parents and young students.

"They were devoted educators. This is a horrific loss," one of Flora's colleagues told Ynet. 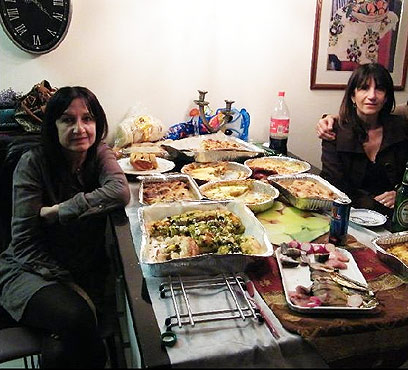 Both couples lived in Kfar Saba, where they will be laid to rest on Sunday.

'I survived by playing dead'

The four's car was the second to be ambushed on Thursday.

Shortly beforehand, the terrorists ambushed another car: Esther and Joseph Levy were on their way back from Eilat to Holon on Thursday, heading north on the Mitzpe Ramon Highway, when they were caught in the fray. They were ambushed by a terrorist who rained bullets on their vehicle, causing it to skid to a halt and flip over. Joseph was killed and Esther suffered a gunshot wound to the chest. Lucky, she was able to stay conscious. "It's a miracle she survived," her cousin, Raffi Mauda, told Ynet. "She told us that she saw the terrorist and prayed he wouldn’t confirm the kill. She essentially played dead for 90 minutes. She was then able to call us and tell us what happened." From her hospital bed, Esther relived the horrific moments which followed the attack: "The radio was still on after the car flipped over… I heard the one o'clock news, about the other incidents. I just kept praying that he stops shooting at us. The radio was playing and I could hear the fire exchange between the terrorists and IDF soldiers. "I didn’t move. I was so scared that he would shoot at us again. There was blood everywhere and I heard my husband wheezing. I could see his shirt, it was blood-soaked." Joseph Levy was a veteran employee of Elbit Systems. "He was such a good man. The salt of the earth. This is a tremendous loss," Mauda said. Levy is survived by his wife and three children. His funeral will be held in Holon on Friday afternoon.