Gaza terrorists launched an incessant rocket and mortar offensive at southern Israel Saturday, wounding at least 11 people across the region.

The barrages followed a declaration by the Izz al-Din al-Qassam Brigades – Hamas' military wing – saying that its armistice with Israel was over.

Saturday morning, the Color Red alert sounded in the greater Beersheba area. A subsequent explosion was reported in the city around 9 am. The projectile landed in an open area just outside Israel's largest southern city, injuring one person lightly. Magen David Adom paramedics attended to both.

Seven other people suffered light injuries while running to a nearby shelter. They arrived at the Soroka University Medical Center in Beersheba independently.

Also Saturday, security forces confirmed that two rockets landed on the outskirts of Ashdod around 6 am. Three people – identified as illegal Palestinian aliens working in the local industrial area – suffered mild to serious injuries and were rushed to the Kaplan Medical Center in Rehovot. The Color Red alert sounded in the greater Ashdod area shortly beforehand.

Iron Dome does it again

Earlier, two rockets landed in the Lachish Regional Council around 12:30 pm. The Color Red alert sounded shortly before the explosion, both across the council's communities, as well as in Kiryat Gat and Gan Yanve, near Ashdod.

One of the rockets exploded on a section of Highway 35, from Ashkelon to Kirtay Gat, damaging it severely. No injuries were reported; security forces have closed the area to traffic. 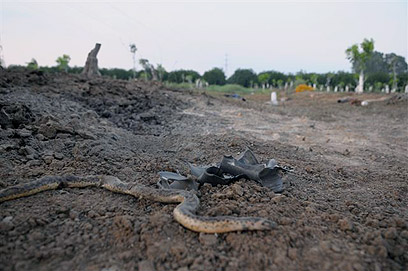 Shortly after that, the Iron Dome missile defense system intercepted a rocket fired from Gaza at Ashkelon.

Four rockets hit Sha'ar Hanegev Regional Council shortly before noon: A mortar shell exploded in one of the council's kibbutzim, causing one person to suffer shock as well as some property damage. Three other rockets exploded in open areas, causing no harm.

Around 8:30 am, a rocket fired from northern Gaza exploded in an open area in the Be'er Tuvia Regional Council, causing no harm. 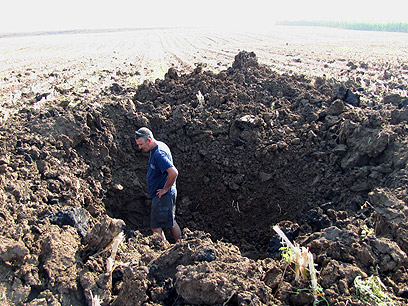 Around 4 am, two rockets were launched at the western Negev, landing in an open area near the Eshkol Regional Council. No injuries or damage were reported. 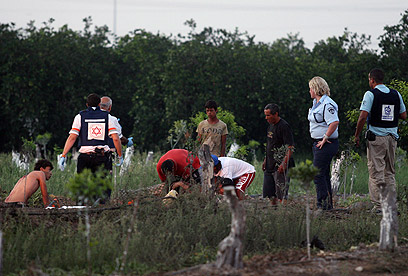 The IDF said the tunnels were meant to smuggle terrorists into Israel, adding that the pilots reported the targets were destroyed.

Palestinian sources reported of another IAF strike in northern Gaza strip at noon Saturday, in the area between Beit Hanoun and Beit Lahiya.

The Palestinian Ma'an news agency quoted medical officials as saying one person was injured in the strike.