The proven success of the Iron Dome defense system against Gaza's terror groups' rocket fire has southern city mayors battling over the right to be the next to have it deployed in their area. Though the relatively new anti-missile system cannot boast a perfect track record yet, the recent escalation in rocket fire in the south, and especially the hellish weekend suffered by it residents, means Iron Dome batteries are in higher demand than ever.

No system can offer airtight protection, an Air Force official told Yedioth Ahronoth on Sunday, especially when there are large cities at risk: "Beersheba is not a medium-sized city. The fact that the system is having some difficulties covering the entire area doesn’t surprise anyone." The IDF also stressed that the system positioned in Ashkelon was incapable of extending its defense to Ashdod.

The system's imperfections, however, have not stopped the south's mayors from pressuring the Defense Ministry and the IDF to position Iron Dome batteries within their city limits: Ashdod, Ofakim, Netivot, Beersheba and Ashkelon are all clamoring for the system, but the IDF currently has only two batteries to spare. 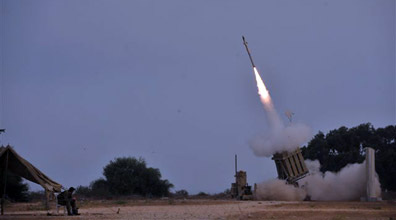 Iron Dome in action (Photo: Avi Rokach)
According to a Knesset Foreign Affairs and Defense Committee report, the IDF needs 15 batteries in order to defend Israel from north to south; and in spite of Defense Ministry declarations, the supply is still some time away. Refael Advanced Defense Systems is set to present the IDF with a third battery no later than October; and the defense establishment has decided to put Beersheba and Ashkelon on the top of their recipients list, as they suffer from a tangible risk of rocket fire. Three additional Iron Dome batteries are set to be supplied throughout 2012, at which time the IDF will be able to offer other southern communities better protection. Unfortunately, this will still mean that Israel's north and center would remain unprotected. Increasing the speed in which the IDF equips itself with Iron Dome batteries is essential, a senior defense source said. "The deployed batteries noted 100% interception over the areas they are defending, but sites without batteries – like Ashdod and other cities in the south – suffered dozens of hits."

And what of rockets that hit open areas? According to defense officials, such incident do not indicate a system failure, but rather the fact that the system is capable of identifying rockets which are not expected to hit populated areas.

Such distinctions allows the system operators to choose to allow them to hit open areas, in the interest of conserving valuable resources.