National Transitional Council chief vows Gaddafi would be treated according to law. British PM urges against reprisals, as EU calls on Gaddafi to relinquish power immediately

Head of the rebels' National Transitional Council (NTC), Mustafa Abdel Jalil vowed Monday to give Muammar Gaddafi a fair trail, should he be captured alive.

The announcement came shortly before Libya's Jamahiriyah state television channel went off the air, after a rebel spokesman announced their forces had taken control of state TV headquarters in Tripoli.

Speaking in a press conference in Benghazi Monday afternoon, Jalil promised that Gaddafi would be treated according to law.

"I have no idea how he will defend himself against the crimes he has committed against the Libyan people and the world," Jalil stated adding he hoped Col. Muammar Gaddafi would be caught alive so he could face trial "in which the world will be witness to the biggest dictator in the world."

The rebel leader further revealed that Gaddafi's captured sons, Mohammed and Saif al-Islam, are "under the control of the revolutionaries and are in safe places."

Meanwhile, Britain urged Gaddafi to stop fighting without conditions after troops loyal to him staged a last-ditch resistance in the capital Tripoli on Monday.

British Prime Minister David Cameron said he would like to see the Libyan leader face justice but that his fate was in the hands of Libyan rebel leaders from the National Transitional Council.

Cameron told the rebels not to indulge in reprisals.

"At the UN, we will be taking early action in the Security Council to give the new Libyan authorities the legal, diplomatic, political and financial support they need," Cameron told reporters.

"We will soon be able to release the frozen assets that belong to the Libyan people." 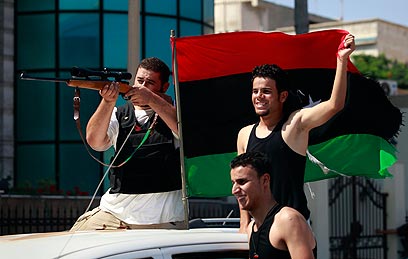 Also Monday, the European Union said that it stands ready to help Libya's interim administration carry out reforms in the future.

"The relentless efforts of the forces of the new Libya, supported militarily by NATO and several EU member states, and countries from the region are bringing the Gaddafi regime to its end," said a joint statement by EU President Herman Van Rompuy and Jose Manuel Barroso, head of the bloc's executive commission. 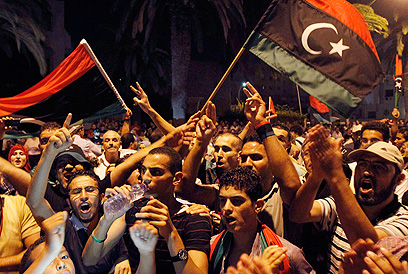 They urged Gaddafi step down immediately and avoid further bloodshed.

"The EU will keep supporting the country in its democratic transition and economic reconstruction, based on social justice, inclusiveness and territorial integrity, together with the international community," the statement said.

Meanwhile, the prosecutor of the International Criminal Court contacted the Libyan rebels Monday to urge them to hand over Gaddafi's son, detained during their dramatic thrust into Tripoli, and avoid taking the law into their own hands.

"It is time for justice, not revenge," Luis Moreno-Ocampo told The Associated Press early Monday, shortly after receiving confirmation that opposition forces have detained Seif al-Islam Gaddafi, his father's one-time heir apparent who has been indicted on crimes against humanity charges.

Moreno-Ocampo charged Gaddafi, his son and his intelligence chief Abdullah al-Sanoussi in May with involvement in a campaign to attack civilians in their homes, shoot at demonstrators with live ammunition, shell funeral processions and deploy snipers to kill people leaving mosques.

Moreno-Ocampo stressed that he wants to put Seif Gaddafi on trial in The Hague. 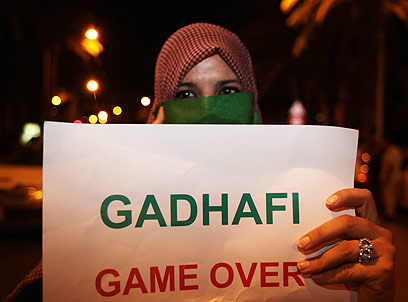 "Muammar, Seif and al-Sanoussi are three persons indicted by the ICC, they should be turned over to the ICC," the prosecutor said. He said that a new Libyan government would have to decide how to handle cases involving lower-ranked officials.

Forces loyal to Gaddafi have stationed tanks near his compound in central Tripoli and are resisting rebel attacks, a rebel official told Reuters by telephone.

"The situation is not stable. There is gunfire everywhere. Gaddafi's forces are using tanks at the port and Al Sarine street near (Gaddafi's compound at) Bab al-Aziziyah," said the rebel official in Tripoli, who gave his name as Abdulrahman.

"The revolutionaries are positioned everywhere in Tripoli, some of them are near Bab al-Aziziyah, but Gaddafi's forces have been trying to resist."

"(Gaddafi's) snipers are the main problem for the revolutionaries. There is a big number of martyrs, including my brother and two of my neighbors," he said.