The fragile armistice declared by the Gaza terror groups was breached once more Monday evening, as several rockets were were fired from northern Gaza at Israel's southern communities.

Four Qassam rockets were fired from northern Gaza at the area: One landed south of Ashkelon causing no harm; and three others exploded in open areas at the Hof Ashkelon Regional Council.

The Color Red alert sounded across the western Negev just seconds before the projectiles landed.

One of the rockets which hit Hof Ashkelon caused a local brushfire, which spread to an area bordering two of the council's communities, and threatened local greenhouses. Fire and Rescue Services teams were able to extinguish the blaze. No injuries were reported.

This was the third time rockets were fired at Israel since the Gaza groups agreed to a lull: A rocket hit the Eshkol Regional Council early Monday morning, damaging an empty building; and a barrage of Qassam rockets was fired at Israel's south Sunday evening, just minutes after a ceasefire declared by Hamas was to go into effect

Monday morning saw the Popular Resistance Committees announce that they had agreed to a temporary truce and will halt their rocket fire at Israel. 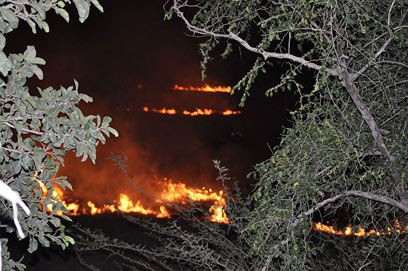 Gaza Government spokesman Taher al-Nunu said that "we have reached an understanding on the ceasefire issue between the factions and Israel. The factions all confirmed that they are committed to the same points that Israel has committed to."