Defying reports of his capture, Seif al-Islam arrives at Tripoli hotel to meet journalists, claims his father is safe in Tripoli and that his loyalists control parts of capital. 'We're going to break rebels' backbones,' he says

VIDEO - The son and heir apparent of Libyan leader Muammar Gaddafi, Seif al-Islam, resurfaced free and defiant early Tuesday a day after rebels claimed to have captured him, boasting in a bizarre reappearance that his father's loyalists still control parts of Tripoli and would crush the rebellion.

Seif al-Islam's sudden - even surreal - arrival at a Tripoli hotel where foreign journalists are staying threw the situation in the capital into confusion. It underlined the potential for Gaddafi, whose whereabouts remain unknown, to lash back even as his grip on power seemed to be slipping fast.

Rebels say they control the large majority of Tripoli, but on Monday they were still fighting pockets of fierce resistance from regime loyalists firing mortars and anti-aircraft guns. Rebel spokesman Mohammed Abdel-Rahman, who was in Tripoli, said the "danger is still there" as long as the elder Gaddafi remains on the run. He warned that pro-Gaddafi brigades are positioned on Tripoli's outskirts and could "be in the middle of the city in half an hour."

The rebel leadership seemed stunned that Seif al-Islam was free. The leadership's spokesman, Sadeq al-Kabir, had no explanation and could only say, "This could be all lies."

He could not confirm whether Seif al-Islam escaped rebel custody, but he did say that another captured Gaddafi son, Mohammed, had escaped the home arrest that rebels had placed him in a day earlier. On Monday, the rebels had said Seif al-Islam was captured, but did not give details on where he was held. The Netherlands-based International Criminal Court - which indicted Seif al-Islam and his father - had confirmed his capture.

Seif al-Islam, with a full beard and wearing an olive-green T-shirt and camouflage trousers, turned up early Tuesday morning at the Rixos hotel, where about 30 foreign journalists are staying in Tripoli under the close watch of regime minders.

Riding in a white limousine amid a convoy of armored SUVs, he took reporters on a drive through parts of the city still under the regime's control, saying, "We are going to hit the hottest spots in Tripoli." Associated Press reporters were among the journalists who saw him and went on the tour.

When asked if his father was safe and well in Tripoli, Seif told a journalist: “Of course.”

The tour covered mainly the area that was known to still be under the regime's control - the district around the Rixos hotel and nearby Bab al-Aziziya, Gaddafi's residential compound and military barracks. The tour went through streets full of armed Gaddafi backers, controlled by roadblocks, and into the Gaddafi stronghold neighborhood Bu Slim. 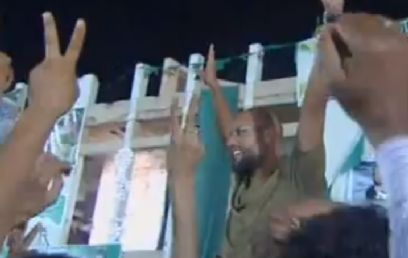 At Bab al-Aziziya, at least a hundred men were waiting in lines for guns being distributed to volunteers to defend the regime. Seif al-Islam shook hands with supporters, beaming and flashing the "V for victory" sign.

When asked about the ICC's claim that he was arrested by rebels, he told reporters: "The ICC can go to hell," and added "We are going to break the backbone of the rebels." 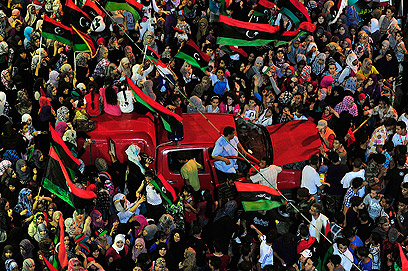 In Benghazi, the de facto rebel capital hundreds of miles east of Tripoli, the head of the rebel National Transitional Council said the rebels have no idea where Gaddafi is or whether he is even in Tripoli.

"The real moment of victory is when Gaddafi is captured," Mustafa Abdel-Jalil said. An Obama administration official said the US had no indication that Gaddafi had left Libya.

President Barack Obama said the situation in Libya reached a tipping point in recent days after a five month NATO-led bombing campaign. However, he acknowledged that the situation remained fluid and that elements of the regime remained a threat.

Gaddafi's forces remained active, firing off a short-range Scud missile Monday near Sirte, Gaddafi's hometown and one of the few remaining cities still under his control, said US military officials, who spoke on condition of anonymity to discuss military operations. It was unclear where the missile landed or if anyone was hurt.

Outside of Tripoli, almost all of eastern and western Libya is now under rebel control. The east of the country from the Egyptian border to Benghazi fell into rebel hands at the beginning of the uprising. In the weeks leading up to Sunday's lightning advance on Tripoli, the rebels consolidated control of the western Nafusa mountain range near the border with Tunisia.

It was from there they staged the run on the capital. Most of the rest of the country was quickly falling into their hands.