Rebel leader: Gaddafi to be tried in Libya, elections in 8 months

Abdel Jalil: We do not wish to continue to be isolated in the world; head of Libya's opposition government is traveling to France and will meet with Sarkozy

Libya will hold elections in eight months and Muammar Gaddafi will be tried in the country, opposition leader Mustafa Abdel Jalil said in comments published today.

"In eight months we will hold legislative and presidential elections. We want a democratic government and a just constitution," promised Abdel Jalil, chairman of the rebel National Transitional Council (NTC).

"Above all we do not wish to continue to be isolated in the world as we have been up to now," he added in comments published in the Italian La Repubblica daily. 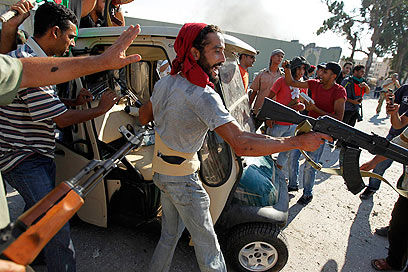 The rebel leader said that the mass of opinion within the NTC was that Gaddafi and his cohorts should eventually be judged "in a fair trial, but it must take place in Libya."

For that to happen "we need to take them alive and treat them differently from the way the colonel treated his adversaries. He will stay in the memory only for the crimes, the arrests and the political assassinations he carried out," he added.

Meanwhile, the head of Libya's opposition government is traveling to France and will meet with French President Nicolas Sarkozy, who has championed the drive to oust Gaddafi.

Sarkozy's office says in a statement that the French leader will meet Wednesday evening with Mahmoud Jibril, head of the rebels' acting Cabinet.

The statement said talks will focus on "the situation in Libya and the international community's actions to support the political transition to a free and democratic Libya."

France was the first country to recognize Jibril's government and has been a driver of the NATO airstrike campaign against Gaddafi's forces.