US radio personality Glenn Beck held a rally at the Davidson Center near the Western Wall in Jerusalem under the banner "Restoring Courage." More than 1,000 of his supporters, mostly Evangelical Christians from the US, participated in the  event.

Beck told the crowd there is nothing he could teach Israel, adding that he comes to Israel to see courage.

"In Israel, you can find people who will stand against incredible odds… against the entire tide of global opinion, for what is right and good and true. Israel is not a perfect country. No country is perfect. But it tries… and it is courageous."

In his speech Beck mentioned the horrific massacre in Itamar in which five members ofthe Fogel family were murdered by Palestinian terrorists: "When the Fogel family was killed in their sleep the world barely took note. The grand councils of earth condemn Israel.

"Across the border, Syria slaughters its own citizens. The grand councils are silent. It’s no wonder children light their streets on fire. 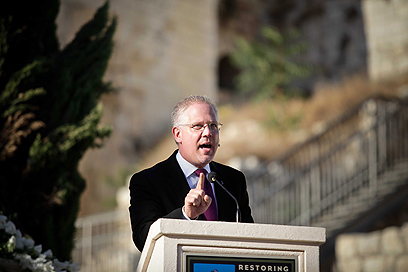 In closing he asked Israelis not to "..lose hope. You must not lose confidence. You must have courage".

Dozens of leftist activists gathered outside the center to protest against Beck, who they consider to be an extreme right-winger. They held banners saying "Glenn Beck, go home."

The protestors confronted Knesset Member Anastassia Michaeli (Yisrael Beiteinu) who was on her way inside to attend the rally.

The protestors followed her while calling out "racist" and "fascist". When she realized they would not stop, she walked up to them and tried to explain her opinions. At that point a heated debate ensued. The protestors claim that MK Michaeli also made harsh statements. Michaeli's spokesmen noted that the protestors spoke to her aggressively but did not get physical.

In his speech, Jerusalem Mayor Nir Barkat declared that Jerusalem will remain united forever. Beck added that the event concerns issues that affect the entire world. 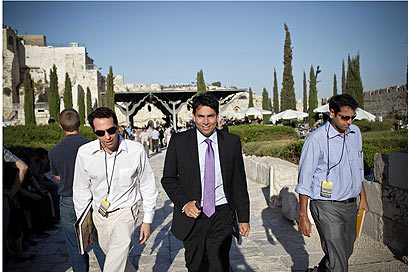 Knesset Member Danny Danon (Likud) addressed the controversy over Beck's visit to Israel and the the Jerusalem Municipality's involvement in the event.

"We have too many enemies around the world, so even when true supports of the State of Israel come to visit – there are those among us who don't know how to honor and appreciate them.

"Despite criticism from left wing organizations, we must say that Glenn Beck represents dozens of millions of people who support him and his opinions."

"We are proud of this relationship and not embarrassed by it," he said. "Anyone who supports Israel is such a brave way must be supported."

Moran Azulay and AP contributed to this report