Gaddafi calls on Libyans to march on Tripoli

Libyan leader Muammar Gaddafi called on his supporters on Thursday to march on Tripoli and "purify" the capital of rebels, who he denounced as "rats, crusaders and unbelievers".

In a short audio speech broadcast on loyalist TV channels, Gaddafi called on all Libya's tribes to rally and expel what he called foreign agents from the country.

"Libya is for the Libyan people and not for the agents, not for imperialism, not for France, not for Sarkozy, not for Italy," he said. "Tripoli is for you, not for those who rely on NATO".

The statement was broadcast shortly after a group of rebels besieging a cluster of apartment buildings near the compound of Muammar Gaddafi said they believed the man who led Libya for four decades was hiding in the buildings with some of his sons.

Rebels were exchanging fire with Gaddafi loyalists inside the buildings. They did not say why they believed Gaddafi and his sons were inside.

"They are together. They are in a small hole," said one of the fighters involved in the battle, Muhammad Gomaa. "Today we finish. Today we will end that."

Earlier on Thursday rebel forces began to purge Tripoli's streets of diehard gunmen still loyal to Gaddafi in the final phase of the battle for the Libyan capital.

Rebels also reported fighting deep in the desert and a standoff around Gaddafi's home town. 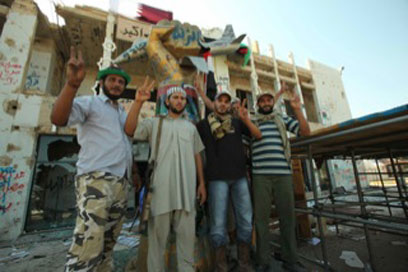 Meanwhile, About 200 foreigners desperate to leave Tripoli began boarding a rescue ship on Thursday, after worries about security in the Libyan capital delayed their evacuation for two days.

The International Organization for Migration (IOM), which chartered the vessel, said security conditions in and around the port had improved enough for the operation to go ahead, allowing the ship to dock at Tripoli port on Thursday.

"It has not been easy to do this operation. We never expected it to be. Nevertheless, there is a huge sense of relief that all our efforts are in the end helping these migrants," Pasquale Lupoli, IOM Regional Director for the Middle East and North Africa, said in a statement.

"However, IOM reiterates its call to all parties to allow migrants safe passage to the port. This issue remains a major challenge in any further evacuations of migrants from Tripoli."

The evacuees expected on board include Egyptians, Filipinos, Canadians, Algerians, Moroccans and an Italian.

"Some migrants have already got to the port," IOM spokeswoman Jemini Pandya told Reuters.

The evacuation mission also faced the possibility of delays because of the difficulty of getting the evacuees safely to the port from their embassies and homes, crossing checkpoints in what has been a war zone over the last 48 hours.

"Fear of fighting, looting, sniper fire and checkpoints prevents migrants from leaving their homes to reach the port area, the only place from which they would be able to flee the country," the IOM statement said.

Although the ship has space for 300 evacuees, it will only pick up about 200 because the two extra days spent at sea have cut supplies of food and water on board, and it would be difficult to restock in Tripoli, Pandya said.

The boat, which has IOM medical staff on board, will leave for Benghazi later on Thursday, and a second ship with capacity of around 1,000 passengers is expected to carry out another evacuation at the weekend.