Golani Brigade Commander Colonel Ofek Buchris presented the findings of the investigation to Nftali's family, who reside in the settlement of Ofra. The findings revealed the Golani force that arrived on the scene moments after the attack acted professionally and determinately, and managed to quickly exterminate the terrorists. The investigation also noted that "Staff Sergeant Moshe Naftali led his soldiers courageously." Naftali, 22, joined the IDF in 2009. Before his military service, he attended a Mechina (pre-army preparatory course) in the Golan Heights for a year-and-a-half. 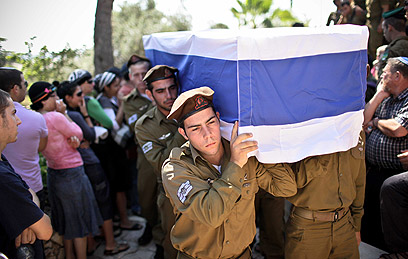 Moshe's mother, Shula, said after her son's death: "Even if I wasn’t there, I know he fought courageously; I have no doubt." His father, Yossi, added, "Moshe never gave up and did everything all the way. Even now he went all the way and left us."

After learning about the circumstances of his son's death, the dad added: "I feel sorry for the soldier who shot my son."

According to Naftali's friends, the parents sympathize with the solider who killed their son. "To them, Moshe is a hero even if he was killed by a bus on the way to the base," one of the friends said.