Who will endorse Palestine?

How will Germany vote? What about Japan? Ynet maps out global interests ahead of Palestinian UN bid

On September 20th, the Palestinian Authority will submit its statehood bid at the United Nations General Assembly; the process will culminate with the UN's 193 member states voting on recognizing a Palestinian state. What can we expect at the vote?

Officials in Jerusalem presume that should a vote indeed take place, the Palestinians will win an automatic majority thanks to the guaranteed support of the 116 "non aligned" states," which tend to vote as a bloc and promote joint interests. Hence, Foreign Ministry officials are focusing their efforts at what they refer to as the "moral majority," that is, large, influential states – this list includes the 27 members of the European Union, global powers, and several other key states.

The failure of such states to endorse a unilateral Palestinian move would make the UN decision illegitimate, Israeli officials believe. For the time being, mostly because the Palestinians have not yet publicized their draft bid, European states have largely refrained from openly voicing their positions. Officials in Brussels are aiming to create a united front of EU states that would abstain in the vote, yet at this time it appears that Europe's votes will be split. The general debate on the Palestinian bid will take place at the UN General Assembly between September 21st and the 30th, and will constitute the final stretch of Israel's and the Palestinians' persuasion efforts. The speakers expected to deliver speeches at the UN include US President Barack Obama, Palestinian Authority Chairman Mahmoud Abbas and an Israeli representative whose identity has yet to be determined. While in Israel the notion of "September" is seen as one of the most significant diplomatic issues of recent years, in Europe and elsewhere this is a rather marginal item on the diplomatic agenda. With EU economies on the verge of collapse, the US contending with its lowered credit rating, and NATO preparing for dramatic changes in the wake of Gaddafi's fall, most "moral majority" states have other priorities at this time. 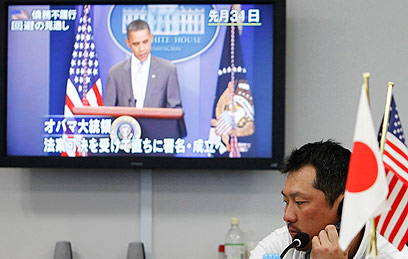 US to object, Japan still undecided (Photo: Reuters)
Foreign Ministry officials estimate that domestic affairs are pushing aside foreign policy issues, a trend that may boost the influence of world powers, with an emphasis on Germany - which is seen as the stabilizing factor in face of the economic crisis. Notably, Berlin already announced that it will object to unilateral steps.

Meanwhile, President Obama already urged the Palestinians to avoid unilateral moves; indeed, America will not be endorsing Palestine, it appears. On the other hand, Russia is expected to endorse any Palestinian bid. In Asia, both China and India are expected to endorse Palestine, while Japan is still debating. Israeli officials are hopeful that Japanese democracy and Tokyo's close ties with the US will tilt the balance in Jerusalem's favor; the Foreign Ministry is also counting on Israel's assistance to Japan in the wake of the tsunami disaster.

Some states still on the fence

Aside from Germany, the major players in Europe are France, Britain, Spain and Italy – which will have a great effect on the position of other countries. Israeli officials do not have high expectations of Spain, which they assume will support the Palestinian bid unless EU countries agree on a unified front.

However, Italian Prime Minster Silvio Berlusconi  announced he plans to reject any unilateral moves. Holland, the Czech Republic, the Baltic States and most of the eastern European countries have conveyed similar messages behind closed doors.

Meanwhile, Britain and France are a different story; both declared they will make up their mind only after carefully reviewing the final Palestinian draft.

"Britain's policy is quite clear: It embraces Israel within the 1967 borders, but condemns it outside those borders," a Jerusalem official said.

As for France - which only recently urged Israel and the PA to renew the peace talks - it has hinted that it will endorse Palestine if the diplomatic freeze continues. However, at this time Paris' vote at the end of the day is still up in the air.

Ireland, the first EU country to upgrade the Palestinian delegation to the rank of embassy, is one of the main advocates of a Palestinian state, joined by Belgium and the Scandinavian countries - except for Denmark which is still undecided.

Greece and Cyprus, which have warmed up to Israel recently, are still on the fence as well. This is mostly due to the fact that both had previously endorsed a Palestinian state - after former Palestinian Authority Chairman Yasser Arafat declared independence in 1998 – making it hard for them to recant.

At this time, the Foreign Ministry is undertaking its final efforts before the UN vote. Israel's diplomats and missions have been trying to mobilize their best connections and activate their 'diplomatic target banks.'

"We have leverage vis-à-vis every country: Our friends in the parliaments, the Jewish community, public opinion leaders, the media, NGOs, the church, donors. It's time to play the cards we accumulated," an Israeli diplomat said.

In addition, a work plan has been formulated for each and every country and designated messages have been drafted as well.

For example, the following message was tailored for Norway, a country associated with the Oslo peace process and most likely to vote in favor of the PA statehood bid: "In Oslo we agreed on an outline for a permanent agreement, and the peace process is named after you. If you support the Palestinians and ditch the outline, it may indicate that Norway has lost it's special status in the peace process."