PM: Cabinet will rule on changes in Egypt peace deal

The cabinet will have to approve any changes in the deployment of forces around the Egyptian border and in the Sinai Peninsula, as well as any amendments to the Israel-Egypt peace deal – should they be required, Prime Minister Benjamin Netanyahu said on Sunday.

"Israel has to deal with complex security challenges that have to do with the changes the region is undergoing – and we are dealing with them," he said.

Over the weekend, Defense Minister Ehud Barak said that in view of the recent terror attacks emanating from Sinai and the area adjacent to the Israel-Egypt border, Israel was considering allowing Egypt to deploy additional troops in the Sinai Peninsula.

Such a move would be contrary to the 1979 peace treaty between Jerusalem and Cairo, but according to Barak, "Sometimes you have to subject strategic considerations to tactical needs." 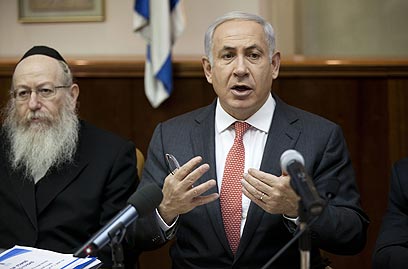 PM Netanyahu during Sunday's cabinet meeting (Photo: AFP)
Though Barak said that Netanyahu was backing the plan, the prime minister stressed on Sunday that any such decision would have to be carefully reviewed and approved by the cabinet. "Security arrangements must be dealt with," the prime minister said, adding that the government plans to invest additional resources into the border project with Egypt. Still, a security source said Sunday that since Egypt has yet to make an official request to allow more of its forces into Sinai, the matter is "not on the agenda at this time." Speaking to reporters prior to the cabinet meeting, Finance Minister Yuval Steinitz also addressed the security situation vis-à-vis Egypt: "Israel's relations with Egypt are of strategic importance and every move has to be reviewed carefully, with its long-term effects in mind. "There are tactical and strategic considerations that have to taken into account in the long run, so every change has to be reviewed carefully," he added. Speaking of the nearing Palestinian bid for statehood, Steinitz said that Israel was "dealing with a Palestinian Authority which has turned its back on the core of the peace process and is trying to push for a hostile Palestinian state, without security or peace, without declaring an end to the conflict and without relinquishing the right of return."

The PA, he added, "is mounting a campaign against the legitimacy of the State of Israel and we have to do everything in our power to either prevent it altogether or minimize the damage. I'm sure the prime minster will make an informed decision as he has done on other issues," Steinitz said.

According to the report, Egyptian security forces have already begun preparations for the destruction of tunnels.

The report stated that heavy machinery has already arrived in Egyptian Rafah to assist with the demolition of the tunnels.

Over the weekend, Arab League Secretary-General Nabil Elaraby said on Friday that all peace treaties are subject to the Vienna Convention and that as such, the Israel-Egypt accords was "not sacred - they are not the Koran or the New Testament." Roee Nahmias and AFP contributed to this report