Masses show up for biggest protest in Israel's history

Tent protest reaches climax point: Some 300,000 gather in Tel Aviv, 40,000 in Jerusalem and 30,000 in Haifa.' Rallies take place in many other cities across Israel. 'Mr. prime minister, we are the new Israelis,' proclaims student leader

Israel's tent protest marked a climax point Saturday as more than 400,000 people took to the streets in demand for social justice in what is being declared the biggest protest in Israel's history.

Some 250,000 gathered in Tel Aviv's State Square after marching from the city's Habima Square, according to police estimates. Charlie Bitton, leader of the 1970's movement the Black Panthers lead the marchers. They expressed dissatisfaction over the high cost of living and chanted "The people demand social justice. "

Some 40,000 people gathered in Jerusalem's Paris Square near the prime minister's residence as well as in the city center. In Haifa some 30,000 protested. Rallies were also held in various other cities across Israel including Afula, Hadera, Qalanswa, Herzliya, Eilat and Arad.

In Nahariya no less than 3,000 gathered, while Carmiel saw 700 protesters and Kiryat Shmona some 5,000. The Hadera rally was attended by more than 2,500 people and some 2,000 people showed up in Eilat.

In Tel Aviv, Chairman of the Student Union Itzik Shmuli addressed Benjamin Netanyahu saying: "Mr. prime minister take a good look at us: We are the new Israelis. And the new Israelis want only one simple thing: to live with dignity in this country. We want not only to love the State of Israel as we do – but also the chance to make an honest living and live with dignity. Let us live in this country." 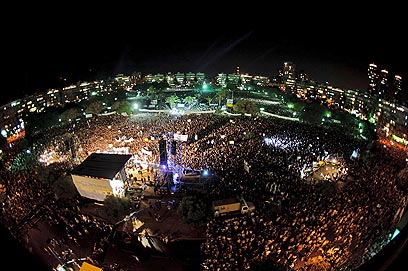 He further added: "Tonight we make history again. The people are supporting a protest started by the young people and a week after the protest was proclaimed over we are on the verge of breaking another record. From now on the government knows that at any given moment Israelis can return to the streets and must therefore deliver the goods."

Daphni Leef, one of the organizers of the tent protest said: "This summer is the great summer of the new Israeli hope born of despair, alienation and impossible gaps."

She added: "The Israeli society has reached its red line, and has gotten up and said 'no more.' This is the miracle of the summer of 2011." 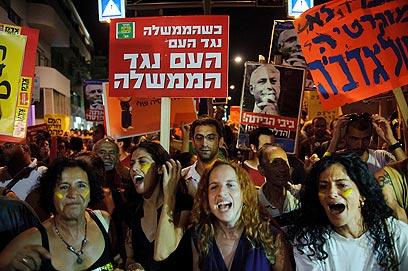 Among the speakers in Tel Aviv was also Dr. Shiri Tenenbaum, a medical resident at the Chaim Sheba Medical Center at Tel Hashomer who addressed the crowd less than a day before her resignation letter goes into effect. "This is a struggle for the very right to health," she said. "There is no medical justice without social justice."

In Jerusalem, the protesters cried "The answer to privatization – revolution," while in Haifa the demonstrators carried Israeli flags as well as signs calling for the release of captive soldier Gilad Shalit.

Meanwhile, the protest organizers announced that the tent site in Tel Aviv's Rothschild Boulevard will be cleared and will no longer serve for accommodation but for public conferences.

Police and emergency services were on high alert Saturday, getting ready for the mass rallies across the country.