In what looks like a retaliation for razing at Migron outpost, Palestinians say first floor of compound set on fire with tires, windows smashed and slogans in Hebrew spray-painted on fence

'Price tag' operation in retaliation for the razing of structures at Migron outpost? Palestinian sources told Ynet on Monday morning that the first floor of a mosque in the village of Kusra, south of Nablus, had been torched.

According to the Palestinians, the fire broke out after unknown assailants shattered the windows of the compound and set tires on fire inside the mosque. The slogan "Alei Ayin and Migron – Social Justice" was spray-painted in Hebrew on the fence outside. 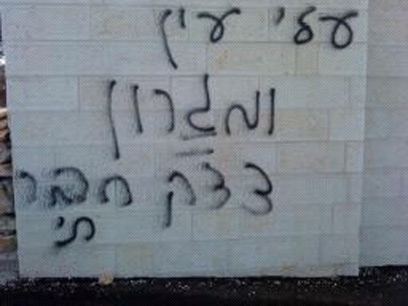 The head of the Kusra Regional Council Hani Ismail Abu-Radi told Ynet that villagers arrived at the mosque at dawn for morning prayers and found the place on fire. "They entered the mosque with tires after they broke the windows and torched the first floor. We notified the Palestinian Liaison Office and they passed it on to the Israelis," he said.

Abu-Radi added that the village has long since been a daily target of settlers from the area.

Rasan Daglas, who holds the Palestinian Authority's settlements portfolio in the northern West Bank added, "This is not the first time that mosques have become targets for attacks." He called on the Quartet to intervene immediately. 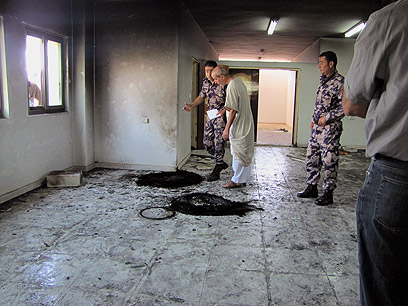 Tires were set on fire in the first floor (Photo: Salma A-Davi, Betzelem)

The Rabbis for Human Rights organization alerted most Palestinian villages in the area overnight, warning them of a possible "price tag operations" in response to the razing of three permanent structures at the Migron outpost.

The organization stressed that the warning had also been delivered to Kusra.

Palestinian Prime Minister Salam Fayyad denounced the attack as an act of terrorism.

"These acts are what threaten to pull the region into a cycle of violence," Fayyad's office said in a statement, adding that the Palestinians themselves would not revert to violence.

An Israeli police spokesman said police and army personnel had entered the village to inspect the damage to the mosque and that the investigation was ongoing.

Hundreds of police officers and Civil Administration officials arrived at the West Bank outpost of Migron overnight in order to raze the three permanent structures. A nighttime courtroom drama caused a delay but operations resumed before dawn and the security forces completed their mission, with relatively minor resistance. Police detained six settlers during the operation.