Passengers arriving in Turkey detained by local police after their passports taken away from them; passenger: Everyone was in shock

About 40 Israeli passengers on board a Turkish Airlines flight from Tel Aviv to Istanbul were held for several hours by local police on Monday after their passports had been taken away from them. The passengers said that the Turkish police officers were disrespectful, claiming that such an incident was unprecedented.

"I think that the police officers didn't even know what they were looking for," one of the passengers told Ynet. "They apparently got an order to detain us, one by one. Everyone was in shock; we didn't know what they were going to do to us. Obviously this was done intentionally in order to create an unpleasant feeling."

Latest articles on the diplomatic crisis with Turkey:

"They asked us why we came here, opened our bags, checked how much money we have and what we have on our laptops," he added. 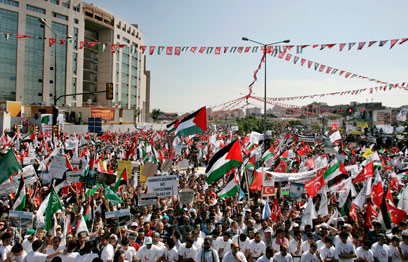 Authorities in Jerusalem estimate that the detention of the Israeli passengers came in response to a recent incident during which Turkish citizens were detained for questioning by border police at Ben Gurion Airport.

Foreign Ministry officials said that no directive was issued regarding a change in the policy that concerns the reception of Israelis, and that there was no intention to single out Israelis that arrive in Turkey. "It was a mid-rank initiative that apparently came in response to the incident at Ben Gurion Airport," they said.

'Point of no return'

R' and D', businessmen who were on the flight said the attitude of the police officers at the airport was estranged. "We have been doing business in Turkey for 13 years. They held all Israelis. Whoever doesn’t have to work here shouldn’t come. They spoke rudely and acted improperly. People missed their connections but they didn’t care," he said.

According to the two, "As soon as they saw an Israeli, they told him to move on to questioning. All the Israelis were together and they accumulated the passports in one pile. I have never seen such a thing. I have also never seen them behaving in such disrespect. I don't know what will be the atmosphere on the street. I don't know what to expect. The papers from yesterday are filled with incitement.

"They asked us how long we are planning to stay, gesturing with their hands to stay put. No explanations were given. They gave back our passports after almost two hours," the two added.

The passengers on board described a sense of anxiety and a desire to return home. "This feels like the point of no return. Whatever we have felt until now, it will not be the same anymore."

Hayuta Leibovitz, another passenger on the flight, said, "I really want to go home but I am already here and I have to work. I will return to Israel on Thursday and then I will think about what's next. Will it be the last time that we come here? If that's the situation, we will go to places where we are wanted. Even if my income is generated here and all my production is done in Istanbul, if they don't me here, I'll leave."

Meanwhile, the Turkish news agency "Anatolya" reported that Turkish tourists had encountered similar treatment at Ben-Gurion Airport. One of them said, "When we reached the airport in Tel Aviv on our way back to Turkey, security personnel took me and my friends aside and we waited there for a long time.

"They asked about our personal information, including email addresses, phone numbers, our family status and even the number of children we had. They checked our luggage multiple times after which they conducted a physical search," he added.

According to the passenger, "They asked us to remove all clothing. They checked a Turkish woman in one of the rooms. They only examined Turkish passengers and the search was very hostile. When we reached Antalya, the plane was forced to perform an emergency landing after one of the passengers felt ill following the way we had been treated in Israel."

The group's tour guide Ansar Ogur added, "The treatment for Turks was different. They went through our luggage many times. Because of their search of the cargo, our flight was delayed. Some of the Turkish passengers boarded at the last minute."

The incident is the latest deterioration in the relations between Israel and Turkey, which culminated on Friday after Turkey expelled the Israeli ambassador following Israel's refusal to apologize over the takeover of a Gaza-bound Turkish vessel in 2010 and the publication of the UN's Palmer Report.

On Sunday, it was reported that Turkish Prime Minister Recep Tayyip Erdogan is slated to visit Egypt and Gaza soon to sign strategic cooperation agreements with Cairo.