South Korea will deploy 67 Spike NLOS rockets on Baengnyeong and Yeonpyeong islands in the Yellow Sea as early as late this year, a South Korean government arms procurement official said. Four South Koreans were killed on Yeonpyeong when the North shelled it last November.

The official declined to be identified, citing policy. He said the deal was made in July. Another South Korean official confirmed the information.

Israel's Rafael Advanced Defense Systems says the rockets can fly up to 15 miles and hit hidden targets. South Korea has been struggling to find ways to take out North Korea's hidden coastal artillery should it attack again. 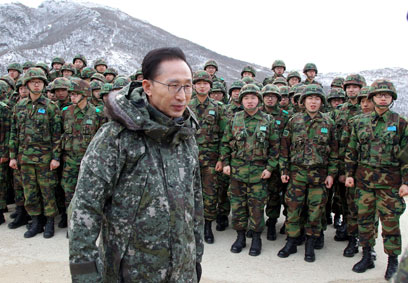 South Korea currently has self-propelled guns, vulcan cannons, multi-rocket launchers, radars and other advanced weapons deployed on the islands, as well as thousands of marines. In June, Seoul set up a separate defense command in charge of troops on the islands.

Violence often flares in the Yellow Sea, and three deadly naval clashes since 1999 have taken a few dozen lives. The maritime line separating North and South Korea was drawn by the US-led UN Command without Pyongyang's consent at the close of the 1950-53 Korean War. That fighting ended with a truce, not a peace treaty, leaving the peninsula still technically in a state of war. North Korea routinely argues that the line should run farther south.

South Korea's moves to bolster its defenses come even as it seeks to revive dialogue with North Korea. Since July, diplomats from the two Koreas and the United States have met to explore ways to revive long-stalled nuclear disarmament talks. Progress, however, has been elusive.

In another sign of easing tensions, a religious delegation from South Korea is in North Korea this week to attend a Buddhist service honoring a historic relic considered sacred by both countries.

On Sunday, a US shipment of humanitarian aid arrived in North Korea to help the country recover from floods and heavy rain. The State Department has dismissed any link between the aid and diplomatic efforts to restart the six-nation nuclear talks.

The talks include the two Koreas, the United States, Japan, China and Russia. During his trip to Russia and China last month, North Korean leader Kim Jong Il reportedly suggested the North might consider a moratorium on nuclear testing and production if the six-nation talks resume.

North Korea is pushing for the talks to restart. The United States and South Korea have so far reacted coolly, saying the North must first show sincerity in abiding by past nuclear commitments before the aid-for-disarmament talks can resume.