WASHINGTON – The Obama administration announced on Thursday that it would exercise its veto power in the UN Security Council to nix any resolution recognizing Palestinian statehood.

"As we have said before, we continue to strongly oppose efforts to address these issues at the United Nations and have made that clear in our discussions with both sides," a Washington source told Ynet.

More on the Palestinian statehood bid:

"The President has also made clear that initiatives through the UN will not bring about the two-state solution and enduring peace, which both the parties and the US seek. There is no substitute for serious and substantive negotiations between the parties, and that remains our focus." 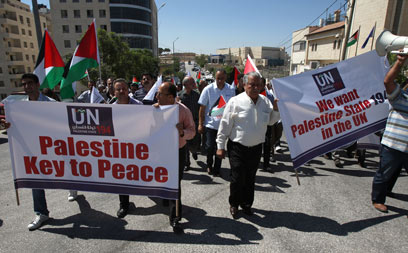 The sentiment was also echoed by senior State Department official Wendy Sherman, who is slated to become the undersecretary of state for policy – the department's third-ranking position. "If any such resolution were put in front of the Security Council, then we would veto it," she said

according to the JTA, Sherman said that the threat of the Palestinians pursuing a symbolic, yet politically potent General Assembly vote still loomed, adding that the United States was still working to get the parties back to the table for talks.

"The General Assembly is still of concern, and so there is very urgent work going on to try to see if there's not another way forward," she said.

Yasser Abd Rabbo, secretary-general of the PLO's Executive Committee commented on Washington's announcement, saying that the Palestinian campaign focuses on the Palestinian people's rights, and not the PA's relations with the United States.

Abd Rabbo added that the bid and the resumption of the Israeli-Palestinian peace process were not mutually exclusive, but rather complementary: "We are serious about the negotiations, nut they must be backed by an international stance which demands earnest and will have no room for any exploitation when it comes to the settlements."

Earlier Thursday, the Palestinians officially launched their campaign to join the United Nations as a full member state, saying they would stage a series of peaceful events in the run-up to the annual gathering of the UN General Assembly later this month.

Some 100 Palestinian officials and activists gathered at the UN offices in Ramallah for a short ceremony, where they announced their plans in a letter addressed to Secretary-General Ban Ki-moon. The letter urges Ban to add his "moral voice in support of the Palestinian people."

"Families of the tens of thousands of victims of Israeli occupation, including those martyred, wounded and imprisoned, and countless others who were expelled from their homes or lost their homes and their property, hope that you will exert all possible efforts toward the achievement of the Palestinian people's just demands," it says. The letter was handed over by Latifa Abu Hmeid. Officials said Abu Hmeid was selected to deliver the document because her personal story reflects the plight of the Palestinians.

The Palestinians have decided to turn to the UN to recognize their independence after two decades of unsuccessful peace efforts with Israel. The latest round of talks broke down a year ago.

While any UN vote will be largely symbolic, the Palestinians believe a strong international endorsement will boost their position and put pressure on Israel should negotiations resume. Israel has been lobbying the international community to oppose the vote, saying peace can only be achieved through negotiations.

The letter says the campaign will include a series of peaceful events "in various international cities and capitals" leading up to the Sept. 21 opening of the General Assembly. Two days later, Palestinian President Mahmoud Abbas will address the gathering in New York and ask for admission to the United Nations.

It remains unclear whether the Palestinians will turn to the Security Council or the General Assembly.

The Council needs nine votes out of 15 and no veto from any of its permanent members to pass a decision. However, the United States, which opposes the Palestinian bid, is expected to veto any request in the Council.

The Palestinians could then seek admission as a "nonmember state" of the General Assembly – a status similar to that held by the Vatican.

Approval in the Assembly, which is dominated by developing nations sympathetic to the Palestinians, is assured. But the vote would not be legally binding. The Palestinians say they will continue their campaign until they gain full UN membership.

Although the Palestinians say their campaign will be peaceful, Israeli military officials fear that mass demonstrations in the West Bank could turn violent.

Security forces have been preparing for the possibility of violence, conducting exercises and stockpiling what they say is "non-lethal" riot-control equipment like tear gas, water cannons and stun grenades.

Elior Levy, AP and Reuters contributed to this report