PM addresses dramatic mob attack on Israeli Embassy in Cairo Friday night, says 'we only had one mission in mind – to ensure the safety of Israeli envoys in Egypt'; says governments are acting to 'quickly return ambassador to Cairo'

In a televised statment on Saturday night, Prime Minister Benjamin Netanyahu addressed the violent riots outside the Israeli Embassy in Cairo Friday night, during which a mob demolished the security wall surrounding the embassy and stormed the premises, forcing the Egyptian commando to evacuate six Israeli Embassy employees that were stranded inside the building in a special rescue operation.

"We are acting along with the Egyptian government to quickly return our ambassador to Cairo," Netanyahu noted, stressing that "Israel intends to adhere to the peace treaty with Egypt."

Commenting on the dramatic events that took place overnight, Netanyahu said: "We only had one mission in mind – to ensure the safety of the Israeli envoys in Egypt. We acted responsibly in order for the event to end in the best way possible." 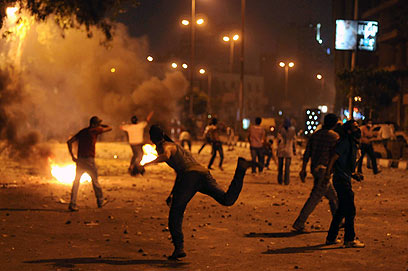 Netanyahu expressed special gratitude to United States President Barack Obama for pressuring the Egyptian authorities to secure the embassy and evacuate the Israeli personnel stranded inside the building.

Describing his phone conversation with the American leader, Netanyahu said: "It was a decisive moment, I would say even fateful. He told me: 'I will do whatever I can,' and he employed all means in his power. I think we owe him special thanks," Netanyahu said.

The prime minister also thanked the Egyptian commandos "who undoubtedly prevented a disaster. We were in contact with the Egyptian government at all times. Both sides were clear that protecting an embassy – and the Israeli Embassy in particular – is an inseparable part of a sovereign state's responsibility," he said. 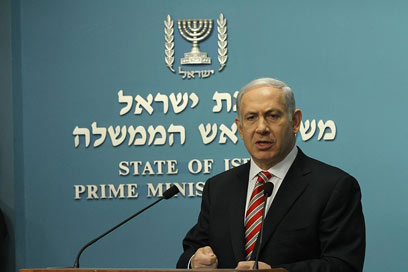 "During this long night, we had to make some difficult decisions," said Netanyahu, and mentioned the conversation he held with Yonatan, the security officer stranded inside the embassy.

"Only a single door separated between the mob and Yonatan and his friends. He sounded calm and collected, but at the same time he was well aware of the grave situation.

"During our conversation, Yonatan told me: 'If something happens, I ask that you let my parents know in person, and not over the telephone.' I told him to hold on, and promised him that the State of Israel is doing everything in its power to bring him to safety. 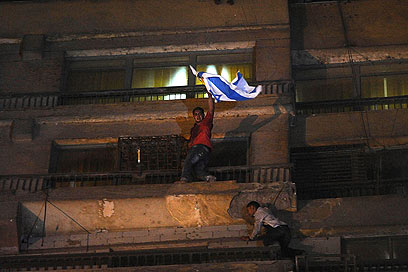 "Thank god this morning they landed in Israel. Several hours ago I spoke with Yonatan and his mother, and they both sounded great," Netanyahu noted.

Addressing the latest developments in the region, Netanyahu said: "The Middle East is experiencing an earthquake on an historic scale. We must act collectedly and responsibly while using our discretion. We must understand that the developments taking place are fueled by very strong undercurrents."

Netanyahu also stated that Israel will continue to act in order to prevent the further deterioration of relations with Turkey. "We will act to subdue the flames, and if possible – to restore the relations with Turkey," he said, adding that Israel will also continue to "strive for a peace agreement with the Palestinians, which will require both sides to return to the negotiating table."