Parts of the wall torn off
Photo: Reuters

Hundreds of Egyptian activists on Friday demolished parts of the wall erected around a building housing the Israeli embassy in Cairo to protect it against demonstrators.

Israeli officials stated that the Egyptian protesters broke into the building and managed to reach the floor on which the embassy is located. However, they have not managed to break in through the fortified doors.

Sources in Jerusalem called the incident a "grave event," and noted that it is still unclear whether the Egyptian security officers who guard the building fled the scene.

The Foreign Ministry opened an emergency situation room and is constantly being updated by Egyptian and Israeli authorities in Cairo. Foreign Minister Avigdor Lieberman arrived at the command post and is being briefed on the latest developments.

Israeli officials also stated that no embassy personnel have been injured. Al-Arabiya network reported that at least 200 Egyptians were injured during the clashes outside the embassy building.

Prime Minister Benjamin Netanyahu spoke with US President Barack Obama and briefed him on the situation outside the Israeli Embassy in Cairo.

Al-Jazeera network reported that the Egyptian army is using tear gas canisters in order to disperse the crowds.

According to eyewitnesses, crowds climbed the embassy security wall, pummeled it with hammers and tore away large sections of the barrier, which Egyptian authorities erected after daily protests last month sparked by tensions over the death of five Egyptian security personnel in Sinai which Cairo blamed on Israel.

The attempt to demolish the wall came after an Egyptian Facebook group called activists to gather outside the Israeli delegation in Cairo and "urinate on the wall."

Egyptian groups also called activists to spray graffiti slogans against Israel on the wall and erect a memorial for the soldiers killed during the attack in south Israel. 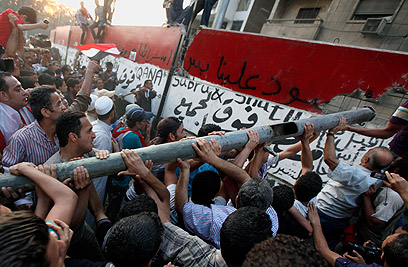 Eyewitnesses said policemen and soldiers stood by as the activists hammered away at the roughly 2.5 metres (8-foot) high wall.

Egyptian officials said the wall was intended to protect residents of the high-rise embassy building, not the Israeli mission. 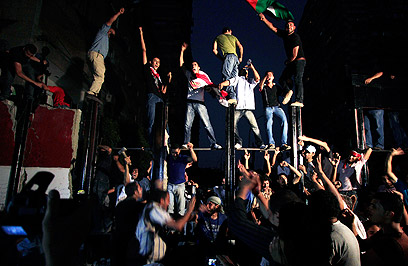 The move against the embassy wall came as around 4,000 Egyptian activists demonstrated in central Cairo demanding faster reforms, ending military trials for civilians.

Since Mubarak's fall, calls have grown in Egypt for ending the historic 1979 peace treaty with Israel, a pact that has never had the support of ordinary Egyptians.