Speaking before a meeting of Arab League foreign ministers in Cairo, Erdogan said that the recognition of a Palestinian state was "not an option but an obligation."

"We are people whose pasts and futures have been determined by God. A Palestinian child's pain hurts the heart of mothers in Ankara."

"Israel is trying to justify its legitimate (claim) in the region while taking steps to jeopardize its legitimacy. The aggressive Israeli government attacked a humanitarian aid sail and then washed its hands of it.

Israel's aggressive politics jeopardize its future. They have placed the Israeli people under siege," he said. 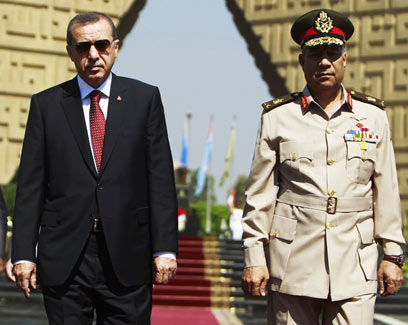 The Turkish leader called Israel a "spoiled child" saying that if international powers continue to turn a blind eye to its actions, there will be no choice but to assert they play a part in the crimes it commits.

Erdogan again stressed that in order to restore relations with Ankara, Jerusalem will have to apologize for the events of the flotilla raid, pay compensation to the families of the victims and lift the Gaza blockade. 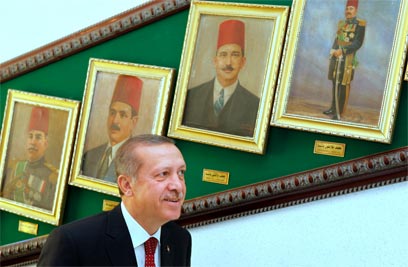 Speaking further of the PA's UN appeal, Erdogan condemned Israeli policies, saying that "The legitimate grievances of the (Palestinian) people can not be suppressed by force."

"The problem between Israel and Palestine concerns all humanity. The state of Palestine must be recognized, it is not an option – it's an obligation. With Allah's help, we shall see Palestine with a different UN status this month."

The Turkish prime minister was visiting Egypt at the start of a North African tour aimed at cementing Turkey's standing in the region following the "Arab Spring" uprisings.

"Freedom, democracy and human rights must be a unifying slogan for the future of our peoples," he told the pan-Arab panel.

"I urge all of you to protect the nations. It is right for everyone in the region – Israel too," he said.

Aiming to paint of picture of Arab unity he said: "At a time such as this, as historic changes are taking place in our region, I am happy to be together with you, our brothers, under the same roof. Despite slight differences in our cultures we are based on the same civilization, and have managed to pass our values from generation to generation."

He further added: "We must provide the legal demands of our peoples in legal ways." Alluding to Syrian President Bashar Assad's violent crackdown of protests, he noted: "Those who use force to silence the people will realize they are making a big mistake."

Erdogan arrived in Cairo on Monday night for a historic visit – his first in 15 years.

During his visit in Cairo he is expected to sign strategic cooperation agreements with Egypt's Higher Military Council. On Monday he pledged to provide Egypt with "any kind of support" to help it get through "this critical and difficult time.

The Turkish prime minister is not scheduled to visit the Gaza Strip, as he had hoped, as part of his North African tour. His schedule includes visits to Tunisia and Libya.

"My wish is to visit Gaza, as is my family and children's. Events in Gaza hold a special place in my world. To my brothers in Gaza I say that I have already reached them in spirit, if not in body. Of course, I would very like wish to visit Gaza."