Erdogan says flotilla raid was 'cause for war'

Turkish PM tells Al-Jazeera: 'It is a cause for war, but we decided to act in line with Turkey's grandeur and showed patience'; Erdogan will give speech at Cairo University where he will set out Turkey's regional vision

Turkey's prime minister says Israel's raid on a Gaza-bound aid flotilla last year was "cause for war" but adds that his country had showed "patience" and refrained from taking any action.

Prime Minister Recep Tayyip Erdogan's comments to Al-Jazeera television come as a rift between former allies Israel and Turkey has deepened over Israel's refusal to apologize for the attack that killed nine activists on board a Turkish ship trying to break Israeli naval blockade of Gaza.

It also comes ahead of Erdogan's visit to Egypt on Monday, aimed at forging closer cooperation with the country whose relations have also grown tense in the past weeks.

Erdogan, who enjoys huge popularity in the Arab world because of his anti-Israeli stance, told Al-Jazeera that the raid occurred in international waters and was therefore "unlawful." 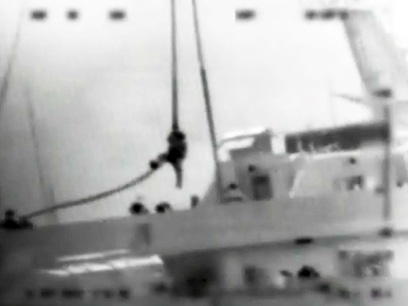 "This attack that took place in international waters is not within international laws," Erdogan said. "It is a cause for war, but we decided to act in line with Turkey's grandeur and showed patience."

State news agency Anatolia released late on Sunday what it said was an original Turkish-language transcript of an interview Erdogan gave to Al-Jazeera television last week. It included elements not broadcast as well as original wording for sensitive comments that had been transmitted only in Arabic translation.

The transcript in Turkish from Anatolian, apparently provided by Erdogan's office, also gave the following account of the prime minister's response to a question on what Turkey would do to ensure free passage for its ships in the Mediterranean.

"Right now, without a doubt, the primary duty of Turkish navy ships is to protect its own ships," Erdogan said. "This is the first step. And we have humanitarian aid that we want to carry there. This humanitarian aid will not be attacked any more, as it was the case with Mavi Marmara."

Israel insists its naval commandos acted in self-defense after being attacked by some of the activists. It has expressed regret for the loss of lives aboard the flotilla and said Tuesday it was time for the two countries to restore their former close ties.

A UN report into the raid said Israel's naval blockade was legitimate but that it used "excessive and unreasonable" force.

Turkey this month suspended its military ties with Israel, expelled top Israeli diplomats, pledged to campaign in support of the Palestinians' statehood bid, and vowed to send the Turkish navy to escort Gaza-bound aid ships in the future.

Erdogan is expected to give a speech on Monday at Cairo University, where his aides say he will set out Turkey's vision for the region.