Last Friday Egyptian protestors broke into the Israeli embassy in Cairo and nearly carried out a lynching against the six Israeli security officers who were barricaded inside. Now, a week later additional tensions between Israel and Egypt have risen. Ynet has learned that on Friday the Egyptian Ambassador to Israel Yasser Reda, was summoned to a meeting at the Foreign Ministry where he was told that "under no circumstances would the peace treaty be reopened for negotiation".

During the meeting, senior Foreign Ministry officials expressed their anger over statements made by senior officials in the Egyptian government in connection with the possibility of re-opening the Camp David peace treaty to negotiation. 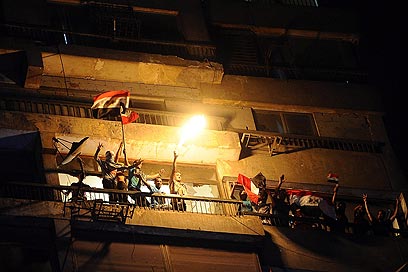 The Israeli officials made it clear that the option was not on the cards. On Thursday Egyptian Prime Minister Essam Sharaf said the treaty needed to be reexamined.

The 30 minute meeting was conducted by Rafi Barak, the Director General of the Foreign Ministry. He stressed that "From Israel's perspective, there are no intentions whatsoever to reopen the peace accords and the step cannot be taken unilaterally."

He noted that "in light if the troubling statements, and in light of the importance we ascribe to Israel-Egypt relations, we are deeply concerned over the declarations made by senior Egyptian officials. I oppose these statements, a change in the tone and level of trust between the two sides is essential to the relationship."

The Camp David accords from 1979 include a clause that allows each of the signatory sides to request a renewed deliberation over the articles in the peace treaty.

Since the ousting of former Egyptian President Hosni Mubarak, there is an increasing number of Egyptians calling for the clause to be put in to use so that Egypt will be able to transfer military forces to Sinai, which according to the original agreement, remains a demilitarized zone.

The Egyptian envoy was summoned following a recent slew of negative statements made by senior Egyptian officials. On Thursday Egyptian Prime Minister Sharaf said that "The Camp David accords were not sacred" and "always open to modification". He claimed that opening the treaty to modifications would "benefit the region or a just peace".

Jerusalem was not amused by the statements: "Israel expresses its irritation over the recurrent calls from senior Egyptian officials over the need for modification to the peace treaty and other anti-Israeli statements," the Director General of the Foreign Ministry Rafi Barak stressed to the Egyptian envoy.

"The relations between our two nations must also find expression in statements and leaders must show responsibility. The recent statements lead to the opposite, the height of which we witnessed in the attempt to harm the embassy in Cairo," Barak added.