Quartet representatives in New York continue efforts to draw up last-minute formula which will prevent Palestinian UN bid. Israeli state officials unsure whether Abbas 'will go all the way'

As international efforts to try to convince Mahmoud Abbas to give up his plans to file a proposal for recognition at the UN continue, Israeli officials are admitting that the Palestinians' plans for the coming week remain a mystery.

"It is unclear to us whether Abbas intends to go all the way," political officials said while noting that the US continues to exert "intense pressure" in order to prevent the Palestinian UN bid.

Following a meeting between US Secretary of State Hillary Clinton and EU foreign policy chief Catherine Ashton, the Quartet's representatives are expected to meet Sunday night in New York to discuss the matter.

Earlier, Defense Minister Ehud Barak met with Palestinian Prime Minister Salam Fayyad in an attempt to convince him to give up the unilateral move. 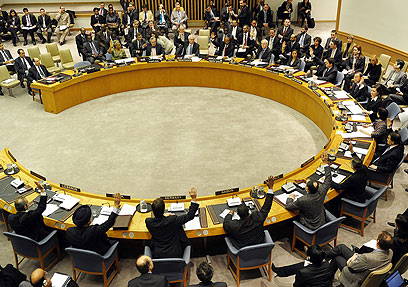 Will Abbas go all the way? (Photo: AFP)

"At this time, the Palestinians are being unresponsive to American and European efforts to commence negotiations based on the US-EU proposal that will be presented by the Quartet," political officials in Jerusalem stated. "They are heading to the UN Security Council."

Speaking before their joint meeting Clinton said: "We are meeting to talk about the way forward." Asked if that meant no progress, she said, "I didn't say that."

Israel believes that it is quite possible that the Quartet will publish a statement in the next few days calling on Israel and the Palestinians to return to the negotiating table, based on President Barack Obama's peace plan.

Nonetheless, Israel still has no clear idea of what Abbas plans on doing after he submits his request. On Saturday there were rumors that claimed that the Palestinians would avoid a confrontation with the US and would not demand an immediate declaration but rather would allow for an extensive debate that would go on in the Security Council for several months.

These claims could not be confirmed by Ramallah or among senior Palestinian officials. Jerusalem refuses to address them as a possibility.

'Abbas adamant in his refusal'

Another option being discussed in Jerusalem is that the US will veto or obtain a majority at the Security Council against the Palestinian bid – and it will crumble. "At the moment Abbas is adamant in his refusal and will not enter into negotiations unless there are preconditions," officials said.

"The US continues to put pressure on Abbas and is angered by his conduct and his opposition. We have no clear picture over whether Abbas intends to go all the way or begin the process for a declaration of state without completing it and thus bring further pressure to bear upon Israel as well as allow him to retreat with dignity if the need arises."

Former British Prime Minister Tony Blair, who serves an envoy for the Quartet, said on Sunday a showdown could still be averted.

"What we will be looking for over the next few days is a way of putting together something that allows their claims and legitimate aspirations for statehood to be recognized whilst actually renewing the only thing that's going to produce a state, which is a negotiation directly between the two sides," he told the ABC television program This Week.