Addressing Benjamin Netanyahu's statements on peace process Jordan's King Abdullah says 'everything on the ground is completely the opposite'; Israelis pretending there is no problem, he tells Wall Street Journal. Meanwhile, 'some progress' made in Quartet meeting in New York

WASHINGTON – Jordan's King Abdullah II is accusing Israeli leaders of "sticking their heads in the sand."

In an interview with the Wall Street Journal, the king, who is currently in New York for the UN General Assembly meeting, expressed concern that Israel's stance on peace talks, as well as the Syrian crackdown of protests, contribute to instability in the Middle East. He did not address the Palestinian side.

He noted, "If we can't get the Israelis and Palestinians together in this next couple of days then what signal is that for the future process? It has a very negative impact I think on all of us in the region."

King Abdullah described previous statements by Prime Minister Benjamin Netanyahu regarding the peace process as "reassuring" but claimed that "everything we see on the ground has been completely the opposite." He added that the best way to describe his view on the matter is "increasing frustration because they're sticking their head in the sand and pretending that there's not a problem."

In the backdrop of Israel's evacuation of diplomats from Amman last week, the King said "There is an unhealthy relationship today people to people" over the Palestinian issue.

More than half of Jordan's population is Palestinian.

Addressing local protests, King Abdullah admitted that many of the demonstrators' demands were legitimate. He noted that Amman was gearing up for municipal elections to be held in December followed by general elections.

"I think that we're way ahead of the curve because we have a plan," he said. "And the job of the leaders is to make sure that government and parliament stick to those benchmarks so that we have a new Jordan as quickly as possible.

"I don't know if that could be said for a lot of countries in the region, some of them maybe going from an Arab Spring to an Arab Summer to an Arab Winter and maybe it takes a while for them to come back up to the Arab Spring again."

Referring to claims he wasn't inducing the democratic process quickly enough, he said that a balance must be found, noting that Jordan's democratic system is not yet ready. "My belief is that the more you develop left, right and center based on political party programs the more challenge it's going to be for the Muslim Brotherhood to integrate into the new system,' he said. 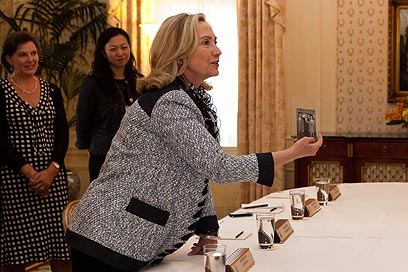 Meanwhile in New York last-minute efforts into finding a compromise between Israel and the Palestinian Authority continued Monday night as Quartet representatives discussed a formula which will prevent the Palestinian UN bid.

A senior US official described the talks as "productive" on but said he could not predict whether they may succeed.

The meeting was attended by US Secretary of State Hillary Clinton and Russian Foreign Minister Sergey Lavrov. An additional meeting is scheduled for Tuesday.

The US official further added that some progress had been made in drafting a joint statement which will be the basis for the resumption of peace talks. The statement is meant to include an upgrade of the PA's status in the UN, recognition of Israel as a Jewish state and a general timeframe for negotiations.

Clinton said there was still time to find a solution to the diplomatic crisis.

She told reporters in New York that the US is talking with all sides to defuse the standoff, noting that the week was young and there were still several days to seek compromise.