Obama to Abbas: Left with no choice, US will veto PA bid

NEW YORK - US President Barack Obama made it clear to Palestinian President Mahmoud Abbas in their meeting Wednesday that the US will veto a UN recognition proposal if left with no other choice, Deputy National Security Advisor Ben Rhodes said in a press briefing.

Obama met Abbas after giving a speech at the General Assembly where he rejected Palestinian plans to seek UN recognition for statehood and expressed unwavering commitment to Israel. This was the first time the two had met since February.

Meanwhile, the Israeli delegation to the General Assembly expressed satisfaction on Wednesday after the first day of the international gathering in New York.

"The Palestinians were routed and they are about to fold. Not everything is sealed but it is clear that they have received a significant blow from the American and French positions," they said. 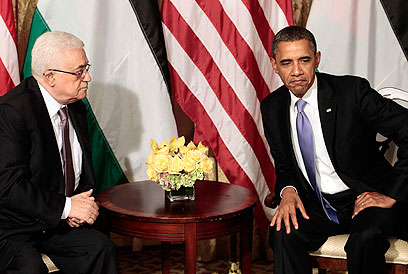 The US and Israel agreed in private talks that Obama will outline the financial ramifications of a unilateral Palestinian move to Abbas. Obama was meant to demand that the Palestinian president meet with Netanyahu as soon as possible so as not to embarrass him.

Abbas had originally intended to meet Obama after submitting the membership bid but was forced by the US to hold the meeting earlier. The US is threatening to cut aid to the PA.

Also Wednesday, US Secretary of State Hillary Clinton met separately with Netanyahu and Abbas as part of efforts to pressure both sides into reaching a compromise. The Quartet wishes to issue a statement which will serve as the basis for a renewed peace process.

Prior to the meeting Netanyahu said: "Well, I did, as you know, and did something that no previous Israeli government did. I actually froze any construction for 10 months, waited nine months and one week; the Palestinians finally came and said, well, keep on freezing.

"So I think wisely – and we concluded with the United States – that what we really have to do is get on with the real issues and get down and negotiate all these issues in order to get peace. We have to negotiate the issues to resolve them. We can’t just negotiate about the negotiations."

Clinton also met with the foreign ministers of Gabon and Nigeria which have yet to announce how they will vote at the Security Council. 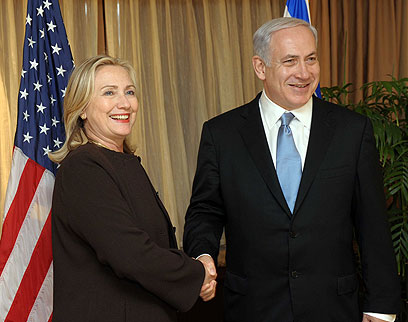 Palestinian official Nabil Shaath said that Abbas was still determined to submit the UN membership bid to UN Secretary-General Ban Ki-moon after his Friday address but may hold-off with the Security Council.

Palestinian official Hanan Ashrawi however told CNN that the PA will not delay its bid more than one to two weeks.

In his meeting with French President Nicolas Sarkozy, who offered a new outline for the resumption of peace talks, Netanyahu urged France to oppose the Palestinian bid.

Israel and US, British and other European officials held talks throughout the day to forge a unified front. Israeli sources estimate that Britain will join Obama in opposing a Palestinian unilateral move at the UN. UN chief Ban Ki-moon, who also met with Netanyahu, said that peace negotiations must resume. Netanyahu thanked him for the UN conduct in relation to the Palmer Report. 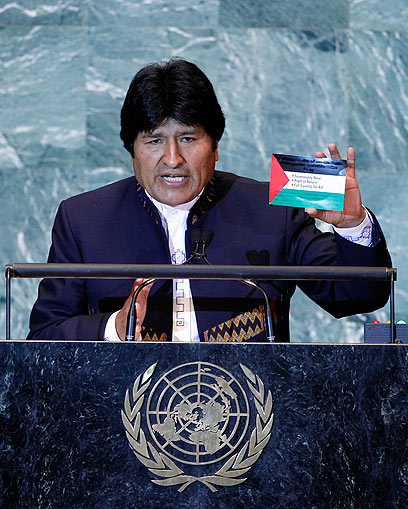 Morales said that Bolivia fully supports the Palestinians and accused Israel of "bombing, attacking and killing" them and taking their lands.

He said that Bolivia is not the only country that supports the Palestinian UN membership bid. Morales added that Bolivia believes that Palestine should be accepted as full UN member as Palestinian President Abbas demands. The statements were met with thunderous applause.