A long-anticipated United Nations report on Israel's deadly raid on a Gaza-bound ship in 2010 justifies Israel's blockade of the Strip, but accuses the IDF of using "excessive and unreasonable" force to stop the vessel.

The UN's Palmer Report was first published by the New York Times Thursday evening. The full report is available here.

Addressing Israel's Gaza blockade, the UN's Palmer Report notes that the Jewish state "faces a real threat to its security from militant groups in Gaza." "The naval blockade was imposed as a legitimate security measure in order to prevent weapons from entering Gaza by sea and its implementation complied with the requirements of international law," the report says. The UN panel noted that Israeli forces who boarded the Mavi Marmara in order to prevent it from breaching the blockade faced “organized and violent resistance from a group of passengers,” adding that the violence required the IDF to use force. 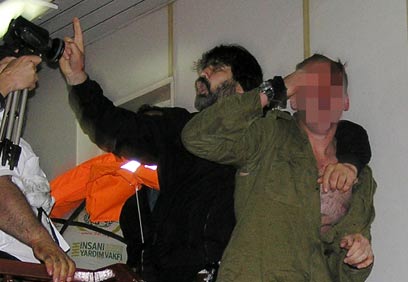 IDF soldier assaulted on Marmara (Photo: AFP)
However, the force used by Navy commandoes was "excessive and unreasonable," the report charges, adding that Israel's treatment of passengers following the raid was flawed. Given the above conclusion, the report recommends that Israel proceed to make “an appropriate statement of regret" and pay compensation to the families of the nine people killed by troops aboard the ship. However, Turkey rejected the proposed formula and is now demanding a full-fledged apology. The Palmer report also slams flotilla passengers, accusing them of acting "recklessly in attempting to breach the naval blockade.”

“There exist serious questions about the conduct, true nature and objectives of the flotilla organizers, particularly IHH," the report says. It added that while Turkey attempted to convince organizers to avoid a clash at sea, "more could have been done."

While acknowledging that Israeli forces faced violence resistance on board the ship, the report slams the killing of nine Turkish activists.

"Forensic evidence showing that most of the deceased were shot multiple times, including in the back, or at close range has not been adequately accounted for in the material presented by Israel,” it says.

The report added that Israel's treatment of passengers following the raid "included physical mistreatment, harassment and intimidation, unjustified confiscation of belongings and the denial of timely consular assistance.”