Despite one fatality, the day dreaded by Israel's defense establishment ended with relative calm. The IDF however will maintain wide-scale deployment in the West Bank until Sunday at least, while the focus is shifting towards the southern border.

IDF forces in southern Israel boosted their alert level Friday evening following concrete information about the intention of Hamas and other terror groups to carry out an imminent attack on the Israel-Egypt border.

Meanwhile, defense authorities said they were satisfied with the ability of IDF and police forces to contain protests and riots by Palestinians at various West Bank sites and praised Palestinian security forces for successfully collaborating with Israeli troops. 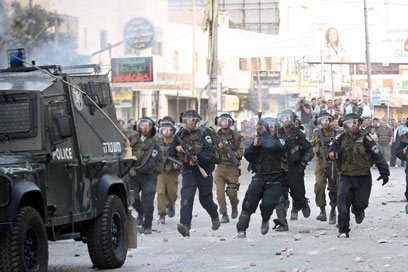 Forces deployed en masse and were equipped with large quantities of crowd dispersal means, but officials said the number of protests was "medium" and noted the army did not utilize all means at its disposal. Riots were recorded in Qalandiya, Nabi Musa and Kedum.

Tensions climaxed midday Friday when a Palestinian man was shot to death by IDF fire during a demonstration near the village of Kusra.

Judea and Samaria Brigade Commander Brigadier-General Nitzan Alon is expected to probe the incident on Saturday. An initial examination suggests that settlers arrived in a Palestinian agricultural plot early on Friday to vandalize it.

An IDF force arrived at the scene and found itself surrounded by some 300 Palestinians who hurled stones at the five soldiers, one of whom eventually opened fire. The IDF said the general aim is not to use live fire during riots.

The IDF is also on alert for possible "price tag" operations by extremist settlers. Police and Shin Bet are monitoring several Hilltop Youth figures in the hopes of foiling any sabotage or vandalism acts which could inflame tensions.

Meanwhile, security forces continue to probe Friday's car accident near Kiryat Arba which left a father and his infant son dead. According to estimates, the car had not been pelted with stones.