Temple Mount: Plenty to see for all 3 religions

Jerusalem site sacred to Jews and Muslims, but Christians will also find plenty with which to identify as Christian fingerprints are evident across site

VIDEO - A Jewish tour guide and a Muslim tour guide meet on the Temple Mount and talk about Christianity. No, this is not how a joke starts but rather a fascinating journey to the stones and ancient remnants that tell the story of a place that is sacred to billions.

Visitors to the Temple Mount who will view it not only as a religious spot but also as a history-rich tourist destination, will be able to see it in a different and fascinating way.

The Temple Mount is sacred to Jews and Muslims but Christians will also find plenty with which to identify, as Christian fingerprints are evident across the site. "Every person connects to this place through his faith. Whatever your religion, you will find yourself here," explains tour guide Ibrahim Gizawi. "The Temple Mount is a charged but exciting place," adds tour guide Danny Herman.

The architectural beauty of the octagon structure with the golden dome cannot be overlooked. Almost every tourist who comes to Jerusalem begins his visit in one of the most important observation points in the world – from Mount of Olives towards the Old City – where one can clearly see the Temple Mount façade and the Dome of the Rock in its center.

The dome was completed in 691 AD. It was started by Umayyad Caliph Abd al-Malik, who hoped that the structure would be "the settling place of Muslims and will protect them from the heat and the cold."

The structure was restored many times throughout the centuries, the latest of which occurred in 1998 by King Hussein of Jordan, who sold one of his homes in London to help finance the purchasing of 80 kg of gold that was needed to cover the dome. 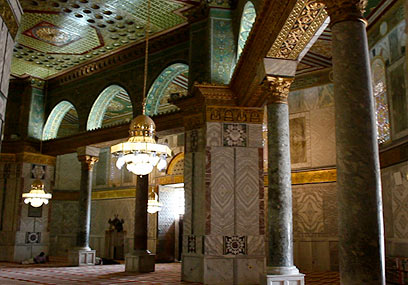 A look inside the Dome of the Rock (Photo: Amos Fridlin)

According to Jewish tradition, the Temple Mount is still a holy place and entrance to it is forbidden to Jews. Some permit it and even view it as a mitzvah but only in the perimeter and not the center, where the Jewish temple once stood. A visit inside the structure reveals fancy ornaments on its walls and ceiling, in addition to mosaics, marble and many etchings. Its octagon shape is what most likely enabled the structure to withstand several earthquakes that had shaken the region throughout history. Non-Muslim visitors can enter the Temple Mount from Sunday to Thursday between 7:30 and 11:30 am and during 1:30 to 2:30 pm during summer, while in winter the site opens at 7:30 until 10:30 am, and also between 1:30 and 2:30 pm. Tourists are not allowed inside the Dome of the Rock and the al-Aqsa Mosque.

As in other holy sites in the city, visitors are asked to dress modestly.