Egypt is considering releasing Ilan Grapel, the Israeli-American who was arrested in Egypt in June, on suspicion of espionage, Cairo's MENA news agency reported on Saturday.

According to the report, Cairo authorities are considering releasing the 27-year-old in exchanged for "greater US political and financial support." MENA's report was not confirmed by either Egyptians or Israeli officials.

Egypt accuses Grapel of being a Mossad agent – an allegation Israel vehemently denied.

"Cairo is considering the release of Ilan Grapel, a US citizen accused of spying for Israel during the 25 January revolution, especially after promises from the US of offering more political and economic support in return," MENA said without elaborating. 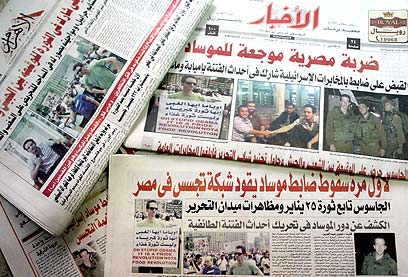 Grapel's parents were allowed to visit him on Saturday, along with the US consul general to Egypt, Roberto Powers, MENA said.

Egypt first announced his arrest in mid June, saying he was suspected of both espionage and of trying to recruit Egyptian youths to both incite local riots and work for the Israeli intelligence services.

The allegations were based on Grapel's presence in anti-government protests in Cairo, and reports that he had meeting with officials in the Muslim Brotherhood – which until the fall of the Mubarak regime were considered an illegal organization.

Israel began campaigning for Grapel's release immediately after news of his arrest broke. Egypt vowed to exhaust all legal measures against him, and promised a speedy trial.

It is believed that the Cairo's sudden change of heart may be related to Egypt's concerns over a bill the Senate is mulling, which states the US aid to its Arab allies – many of which are now reeling from the Arab Spring – would be cut or suspended pending assurances that democracy has indeed taken over for their previous regimes.

Should that be the case, Washington's generous, $1.3 billion aid package, may by jeopardized; despite Egyptian Foreign Minister Mohamed Kamel Amr's warnings against such measures.