VIDEO - Prime Minister Benjamin Netanyahu spoke to Shin Bet chief Yoram Cohen Monday to discuss the "price tag" attack in Tuba Zangaria. Netanyahu instructed Cohen to find the culprits as soon as possible. "The images are shocking and have no place in the State of Israel," he told the Shin Bet chief. A statement issued on behalf of the prime minister said: "Netanyahu was outraged when he saw the photos and said the act went against the State of Israel's values. Freedom of religion and freedom to worship are supreme values."

Meanwhile, the police announced that several suspects were arrested in connection to the incident.

However, unrest around the village continues. Some 300 residents of Tuba Zangaria clashed with security forces after they took to the streets to protest the attack. Locals disrupted traffic on Highway 90 and some hurled stones at officers and torched tires. Police forces responded with crowd dispersal means.

Later on Monday, about 50 protestors marched at the village's northern entrance, calling out 'Allah Akbar' (God is great) chants, torching a nearby field and setting tires on fire. Some carried signs reading "No to Violence, Yes to Peace." 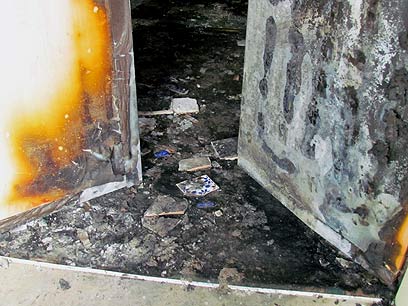 Regional police commanders arrived at the scene to help restore calm and end the protest. To prevent an escalation, police beefed up its presence in the area and scrambled a helicopter to hover above. "Calm on your end will lead to calm on our end," police sources said.

Northern District commander Roni Atiya was briefed on the events in the area. "There was a procession in the village. We instructed police forces to use all necessary measures to prevent the protestors from reaching highway 90 and Rosh Pina," he said. 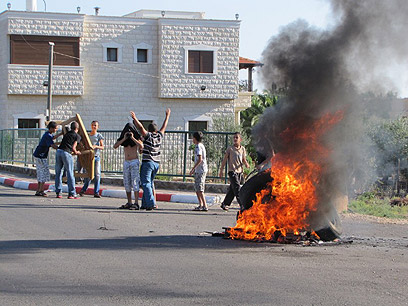 According to Atiya, masked protestors also took part in the demonstration, hurling stones at security forces.

The police commander referred to the investigation into the apprehending of the perpetrators who torched the mosque, saying, "I would not suggest to anyone to pin blame. We are working hard to catch those responsible and we have made several arrests that may be linked to the arson." He would not elaborate. 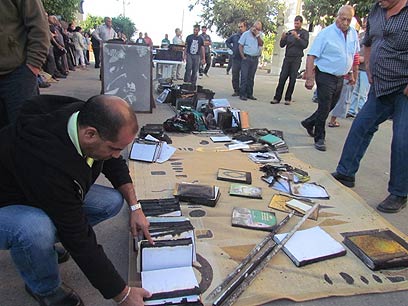 Meanwhile, various Israeli senior officials condemned the torching of the mosque. Internal Security Minister Yitzhak Aharonovitch spoke to the police commissioner and said that "harming holy places is a criminal and shameful act that cannot be ignored. We will act to bring those responsible swiftly to justice."

Knesset Member Ahmad Tibi said: "Those who failed to stop the cancerous growth and the mosque burning in the occupied territories should not be surprised when the metastasis grow inside the State of Israel.

"This is not a bunch of 'price tag' vandals, this is a terror organization raging unrestrained with the endorsement of inciting racism like that of the rabbi of the city of Safed who has yet to be brought to trial."

Knesset Speaker Reuven Rivlin also addressed the mosque torching and said that "burning a place of worship is a criminal and abominable act. These criminals, if they are Jews, are the main threat to the State of Israel in general and especially the Zionist movement. They keep the Jewish dream and the vision of returning to Israel far away and they must be brought to justice." 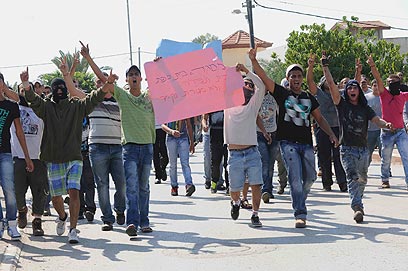 Knesset Member Uri Ariel (National Union) condemned the attack but noted that "it has previously been discovered many times that suspected 'price tag' cases were exposed as local mishaps used in an attempt to slander an innocent sector of the public. That is why I would suggest that the veracity of the matter be examined before making headlines."

The Galilee Regional Council Chief Aharon Valensi sought to calm the Arab public: "The residents of Tuba should know that the neighbors here strongly condemn this act. These operations do not fit our quiet region or the ongoing relationship between the area's residents. It very much upsets me. I hope this incident will not lead to unnecessary commotion."

Rabbi Gilad Kariv, head of the Israel Movement for Progressive Judaism called on Israel's religious leaders, first and foremost the rabbis, to condemn the "price tag" phenomenon in a resolved manner.

"This isn't a marginal act of hooliganism, this is the ongoing growth of a phenomenon that receives the silent approval of the community and rabbinic leadership," he claimed. A resident of the village, Maher, stood with his son at the entrance to the mosque. "This is something that we did not expect. There are no words to describe it. I hope it will not lead to the area exploding. We have had good relations with the communities in the area for many years now. This is a mosque that has five prayers a day, our children are being educated here. We have heard of similar occurrences in the West Bank but never believed it would happen here."

Former regional council chairman Hussein al-Haib said, "It came as a surprise and hurts our feelings when we see the slogans 'revenge' and 'price tag'. This is a nice Bedouin village that is very devoted to the State of Israel. This will surely harm the relations with the neighboring communities and it is a shame. We don't want the relations harmed."

Some villagers pointed their finger at a group of extremists in Safed, whom they claim could have been involved in the act. Safed police, however, said that it was not aware of such a group.