The IDF is taking no chances on the eve of Yom Kippur. In an unusual and rare step, The IDF's General Staff alerted two reserve divisions as part of an emergency drill in army bases in central and northern Israel. The purpose of the exercise was to test the soldiers' level of response and readiness for war.

On Wednesday evening, at 6 pm, reserve soldiers received a phone call ordering them to report to their units immediately. The drill ended on Thursday at 4 pm.

The army decided to hold the exercise in the backdrop of recent developments in the Middle East and some 48 hours prior to Yom Kippur. 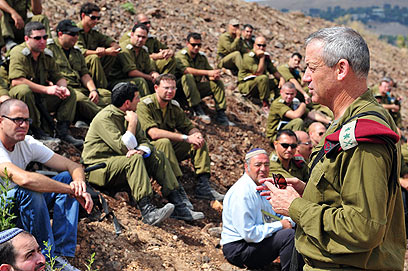 IDF chief Gantz with reserve soldiers (Photo: IDF Spokesperson's Unit)
"The timing is more than a coincidence and is part of the army's preparation for the upcoming days in light of changes in the region," Head of the Operations Division's Inspection Department, Col. Shlomi Fayer said. "The two divisions were duly found to be highly ready and capable."

A check conducted by the Inspection Department revealed that 90% of the soldiers who were alerted reported for the drill. Commanders were on full attendance.

As part of the exercise, infantry and armored forces opened equipment depots and took out tanks and armored vehicles. IDF Chief of Staff Lieutenant-General Benny Gantz observed the activity closely during a visit to the war-reserve-stores unit in the Northern Command. Deputy chief of staff Major-General Yair Naveh visited the same unit at the Central Command.

"Unlike routine inspection, this time operational activity was directed by the general staff with no pre-determined time frames," Col. Fayer said.