Parents of Gilad Shalit respond to petitions filed by terror victims' families against prisoner swap deal, ask court to uphold government's decision, but say 'this does not mean we do not identify with the pain of the families'; Aviva Shalit: 'It's a matter of life or death'

The High Court on Sunday accepted a request made by the Shalit family to act as a respondent in the petitions filed before the court against the prisoner exchange deal that will see their son freed from Hamas captivity in return for the release of 1,027 Palestinian prisoners.

Justice Hanan Meltzer ruled that the family representatives will be able to take part in the hearings which will take place at noon on Monday and stated that they must present a response at least two hours before the hearing.

Earlier on Sunday, Aviva and Noam Shalit appealed to the High Court of Justice, and requested not to amend the details of the prisoners exchange deal.

In their petition, the Shalits wrote: "This does not mean, under any circumstances that the Shalit family does not identify with the pain of the families of terror attack victims or respect their pleas.

Noam Shalit said that the family's decision to ask the High Court to respond to the petitions against the deal is mainly from fear that the cancellation of the deal would cause irreparable damage to Gilad's affair.

"Any delay can be fateful. If the deal does not go ahead now it may never go ahead", said Shalit and added that he respects the bereaved families and feels their pain.

At a press conference on Sunday evening Aviva Shalit, mother of captive soldier Gilad Shalit said "we identify with the pain of the bereaved families". 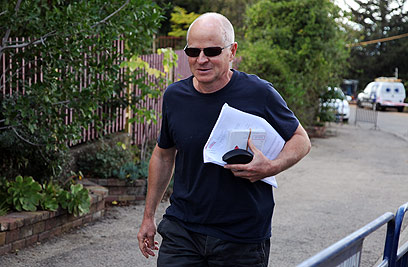 "Yet in spite of that, any delay or postponement of the deal may endanger Gilad's life. It is a matter of life or death", she added and thanked the nation and media for their support.

'No authority for collective pardon'

Earlier on Sunday, family members of terror victims filed petitions with the High Court of Justice in an effort to stop the release of their loved ones' murderers.

Surviving members of the Schijveschuurder family, who lost five relatives in a 2001 suicide bombing of a Jerusalem Sbarro branch, filed a petition with the High Court of Justice to prevent the release of Ahlam Tamimi, an accomplice who drove the terrorist to the scene of the attack.

"Asked whether she regrets the act, Ahlam Tamimi told an Israeli reporter that she was saddened that she could not kill more than 15 Jews," the petition said.

Families of victims of a Haifa bus bombing also filed a suit with the Haifa District Court against three men involved in the terror attack, who are set to be released as part of the prisoner swap. The Kerman and Tzur families are motioning for a hold-departure order as well as NIS 2.25 (roughly $610,000) million in compensation. They later retracted their petition, after learning that the claim can be pursued even after the three are deported.

On Sunday afternoon, Attorney Ze'ev Dasberg from the judicial institute for terror research, whose sister and brother in law Effi and Yaron Unger were murdered in a terror attack near Kfar Menachem in 1996 filed an additional petition in the high Court, the third of its kind against the Shalit deal.

In the petition Dasberg claims that according to law, the president does not have the authority to offer a collective pardon, unlike his authority to pardon prisoners individually.

The petition further claimed that international law obliges the State to take effective deterrence measures and in his opinion, this deal goes against that law due to the release of the terrorists.