Palestinian prisoners freed by Israel as part of the Shalit deal and deported abroad received a warm welcome in Syria, Turkey and Qatar early Wednesday. "As long as there are prisoners in Israel, the mujahideen will always try to free them," one prisoner pledged as he landed.

Hundreds of people greeted the 16 Palestinian prisoners who arrived in Damascus. "The resistance is increasing and there are steps for the future," prisoner Nimer Darwaze said. "The resistance will continue until the victory, God willing."

Mashaal to prisoners: You will return to Palestine 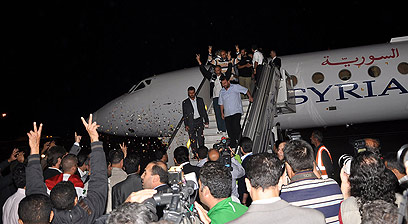 Eleven Palestinians arrived in Turkey and made V-for-victory signs as they arrived in Ankara, television pictures showed.