477 prisoners handed over to Red Cross

Prisoner exchange going according to plan: First stage of Shalit deal, which will see release of 477 Palestinian prisoners in exchange for IDF solider launched

All 477 prisoners set to be released as part of the first stage of the Shalit deal have been handed over to the Red Cross.

Police deployed dozens of road blocks in the Kerem Shalom and Eshkol area. The southern part of the sector was declared a closed military zone and traffic is prohibited. Gilad is meant to arrive at a military base near Kerem Shalom in a military vehicle after crossing over from Sinai, as the prisoners are being transported to Gaza.

A Hamas publication reported Tuesday that buses of Palestinian prisoners have started crossing into the Egyptian city of Rafah.

The exchange was briefly delayed as two female Palestinian prisoners refused to move to the Gaza Strip from Israel and insisted instead to move to Egypt. The problem was eventually solved when one of the prisoners came around and agreed to move to Gaza, while the other will be transferred to Egypt which agreed to take her in.

One of the prisoners is Miryam Salim Tarabin, originally from Jericho, who was arrested in 2005. She was sentenced to eight years and two months in prison. Tarabin is meant to be released to Gaza where her family lives.

According to reports, the second prisoner is Amna Muna, who lured teenager Ofir Rahum to his death in 2001. She is considered the leader of the female Palestinian prisoners held in Israel and previous reports suggested she terrorized inmates. It was feared that families of the prisoners will seek revenge over her abuse of the other inmates.

The prisoner exchange operation is being managed by Operations Division chief Brigadier-General Kobi Barak. IDF Chief of Staff Benny Gantz is closely monitoring the events. Egypt is slated to provide a first sign of life from Gilad after he arrives in Rafah.

The prisoner exchange deal signaling the end of Gilad Shalit's five-year Hamas captivity began in the early hours of Tuesday morning, as the Israel Prison Service (IPS) shuttled all 477 Palestinian prisoners slated to be released as part of the first stage of the deal to their rendezvous points with Red Cross. 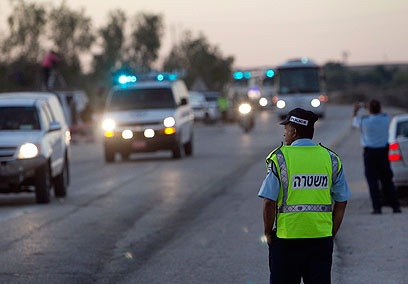 At 2:30 am the order for the prisoners' transfer from the Hasharon and Ketziot prisons was given. At 5 am a convoy carrying 147 prisoners left Ketziot en route to the Kerem Shalom border crossing. By 6 am, all prisoners arrived at the border crossings and are now awaiting their release expected once the transfer of Shalit to Israel is complete.

Egyptian Consulate officers arrived in Hasharon and Ktziot prisons overnight to monitor the process. The prisoners were transported to the Kerem Shalom crossing near the Gaza border and the Beitunia crossing near Ramallah, ahead of the actual exchange.