A tyrant's end: Muammar Gaddafi, who ruled Libya with a dictatorial grip for 42 years until he was ousted by rebels in a bloody civil war, was killed Thursday when revolutionary forces overwhelmed his hometown, Sirte, the last major bastion of resistance two months after the regime fell.

Libyan Prime Minister Mahmoud Jibril confirmed Gaddafi had been killed. "We have been waiting for this moment for a long time. Muammar Gaddafi has been killed," Jibril told a news conference in the capital Tripoli.

The vice chairman of Libya's National Transitional Council also confirmed that the ousted leader was killed: "We announce to the world that Muammar Gaddafi has been killed at the hands of the revolutionaries," Abdul Hafiz Ghoga told a news conference in Benghazi. "We will announce the liberation of Libya within hours, maybe sooner."

Al Jazeera English Television broadcast what it said was exclusive footage clearly showing Gaddafi's body being dragged by rebels along a street. The footage showed the half naked body of the toppled Libyan strongman being stripped of his shirt. His face was red with blood and had a bullet hole in the side of his head.

Abdul Hakim Al Jalil, commander of the 11th brigade, also said he had seen the body of the chief of Gaddafi's armed forces, Abu Bakr Younus Jabr. "I've seen him with my own eyes," he said and showed Reuters a picture of Jabr's body. "Moussa Ibrahim was also captured and both of them were transferred to (our) operations room."

Meanwhile, Libyan officials and NATO said that they could not confirm reports from revolutionary fighters that the ousted Libyan leader was captured or killed in the fall of his hometown. 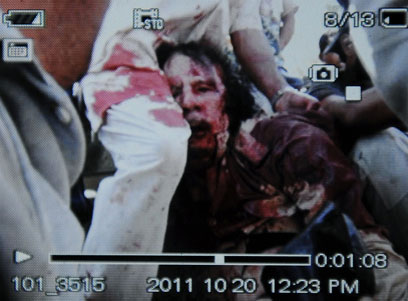 The spokesman for Libya's transitional government, Jalal al-Gallal, and its military spokesman Abdul-Rahman Busin said the reports have not been confirmed. A NATO official also said the alliance could not independently confirm.

"We are checking and assessing the situation," a NATO official said. "Clearly these are very significant developments, which will take time to confirm. If it is true, then this is truly a historic day for the people of Libya."

White House officials are said to be monitoring that eports of Gaddafi's death in Libya, but were unable to confirm the status of the former Libyan leader.

'Free from east to west'

The transitional government also said another Gaddafi son, his one-time heir apparent Seif al-Islam, was captured, wounded by revolutionary fighters and was in a hospital.

The capture of Sirte means Libya's ruling National Transitional Council (NTC) should now begin the task of forging a new democratic system which it had said it would start after the city, built as a showpiece for Gaddafi's rule, had fallen. 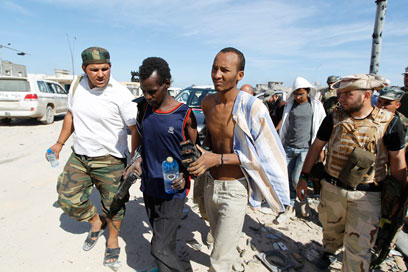 "Sirte has been liberated. There are no Gaddafi forces any more," said Colonel Yunus Al Abdali, head of operations in the eastern half of the city. "We are now chasing his fighters who are trying to run away."

Government fighters hoisted the red, black and green national flag above a large utilities building in the centre of a newly-captured Sirte neighborhood and celebratory gunfire broke out among their ecstatic and relieved comrades.

"Libya is free from east to west," cried a young fighter Malik Al Gantri, a young fighter from Tripoli who had been in the battle for Sirte for two weeks. "I hope to go home now," he said. "I want to see my mother."

Celebratory gunfire and cries of "Allahu Akbar," or "God is Great," rang out across the capital Tripoli as the reports spread. In Sirte, the ecstatic former rebels celebrated the city's fall after weeks of bloody siege by firing endless rounds into the sky, pumping their guns, knives and even a meat cleaver in the air and singing the national anthem.

Also on Thursday, Amnesty International called on Libyan revolutionary fighters to make public the full facts of how Muammar Gaddafi died, saying all members of the former regime should be treated humanely.

The London-based rights group said that it was essential to conduct "a full, independent and impartial inquiry to establish the circumstances of Col. Gaddafi's death."