Army to discuss 'Hannibal Protocol' which stipulates kidnappings of living soldiers must be prevented at any cost, including endangering captive's life

The IDF's operational forum will discuss a procedure which stipulates that the abduction of living soldiers must be prevented at any cost later this week in the backdrop of the Shalit prisoner exchange deal, Yedioth Ahronoth reported.

Since Shalit was released in exchange for 1,027 Palestinian prisoners Hamas has stressed that it will attempt to kidnap more soldiers in order to bring about the release of the remaining Palestinians held in Israel.

The IDF estimates the threat is concrete and has therefore briefed commanders on a series of preliminary actions which can help prevent kidnappings. IDF Chief of Staff Benny Gantz has also ordered that the commanders learn ways to actively thwart kidnappings, even at the expense of the kidnapped soldier's life. 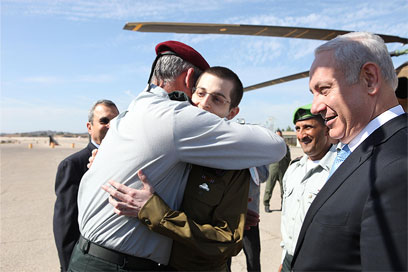 The "Hannibal protocol" became official in the 1980s. It stipulates that IDF soldiers must prevent the abduction of a living soldier at any cost including opening fire at the abductors' vehicle. The protocol takes into consideration the fact that the captive soldier may be killed, with the guiding principle being that a dead soldier is better than a kidnapped soldier in the eyes of the State of Israel which will be forced to pay a heavy price for the captive.

In practice, each commander gives his own interpretation of the order to his men. On the eve of Operation Cast Lead, for example, a Golani battalion commander told his soldiers that if they find themselves in danger of being kidnapped they must blow themselves up using a grenade.

Former Nahal Brigade commander Col. Motti Baruch instructed his men to do everything in their power to prevent kidnappings including firing at the abductors' vehicle while endangering the captive's life.

However, not all commanders agree with the protocol. Some claim that human life must be treasured and therefore ignore the subject in briefings, leaving their soldiers to exercise their own judgment. Gantz will be forced to form a clear and unified policy next week which will no doubt prompt a public discussion. Meanwhile IDF officials stressed that the protocol will not be changed but procedures will be revisited to prevent any misunderstandings.