Israel has authorized its military to take all necessary steps to stop rocket fire from Gaza, including a ground operation, an Israeli military official said Tuesday, as Egypt worked on a truce and said Israel had agreed to delay stepping up its response.

The Israeli government decision stopped well short of ordering tanks to roll into Gaza, and it appeared unlikely that would happen, as rocket fire all but stopped over the past day.

The official said the decision authorized the military to act in accordance with the severity of Palestinian attacks, meaning that a ground offensive would be ordered only after massive rocket fire. He spoke on condition of anonymity because no statement was made.

Education Minister Gideon Sa'ar and local council heads decided to open schools again on Wednesday after three days of suspension. However, shortly thereafter a Qassam rocket exploded in an open area in the Eshkol Regional Council. No injuries or damage were reported.

Egypt's ambassador to the Palestinian Authority said Tuesday that Egypt obtained an Israeli pledge to hold its fire while efforts were under way to persuade Palestinian militants to stop the rocket barrages. 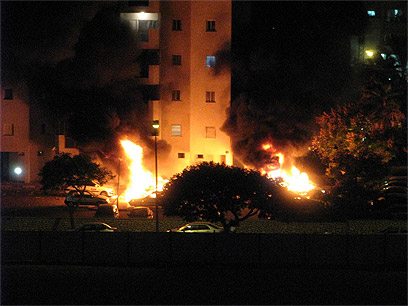 The sudden spike in violence began when militants in Gaza started firing salvos at Israel late last week, and Israeli retaliated with airstrikes. One Israeli civilian and at least Palestinian 10 terrorists were killed in the worst violence on that front in months.

"In the past few hours, Egypt saved Gaza from severe destruction and succeeded in securing Israeli restraint to give Egyptians time to reach a cease-fire agreement with Palestinian factions," Egypt's ambassador to the Palestinian Authority, Yasser Othman, told The Associated Press Tuesday.

On Monday, Netanyahu warned from the podium of the Israeli parliament that Israel would operate "vigorously and resolutely" against those who would threaten its security.

"A security philosophy cannot rely on defense alone," Netanyahu said. "It must also include offensive capabilities, the very foundation of deterrence." The military said there have been no Israeli airstrikes since around midnight Monday. Two rockets were fired from Gaza during that time. The relative calm prevailed through Tuesday afternoon.

The rocket attacks have disrupted life in southern Israel, forcing schools to close. About 1 million Israelis live within range of rockets from Gaza.

The Islamic Jihad faction was behind the initial rocket attacks. On Sunday the militant faction agreed to stop the violence if Israel also did. Rocket fire that drew retaliatory Israeli airstrikes persisted afterward, but it was claimed by a different militant group, the Popular Front for the Liberation of Palestine.

Israel holds Hamas responsible for all violence from the territory.